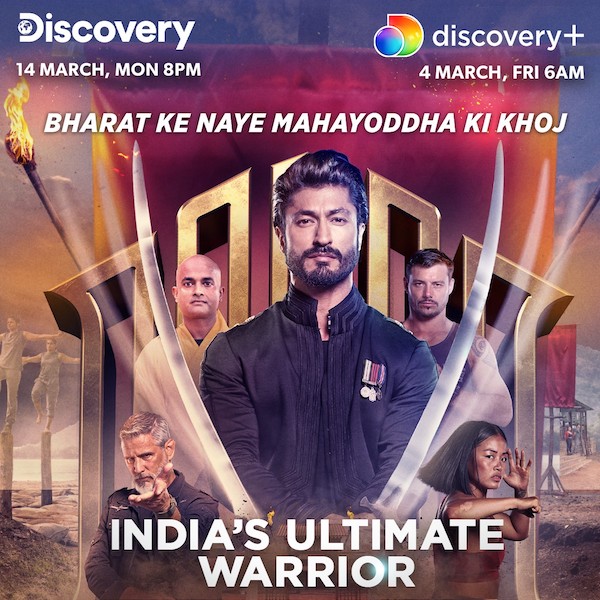 March 21, 2022: Action superstar Vidyut Jammwal often displays his affectionate and generous side, which people recently witnessed on the sets of ‘India’s Ultimate Warrior’. As the gruelling, competitive yet memorable journey of searching for India’s next ‘Mahayoddha’ concluded, Vidyut applauded and thanked the efforts of the entire team through handwritten personalized notes for 140 crew members of the show.

Not only was he highly impressed by the dedication of the contestants and the phenomenal guidance given by the mentors but also by each team member who worked relentlessly to do justice to this one-of-a-kind series. The actor felt everyone in the show came in as strangers but after being together in this journey full of highs and lows, they went back with bonds that will last a lifetime. On the fifth day, Vidyut was honored with a standing ovation by the entire crew for his generosity.

Expressing his emotions, Vidyut said, “India’s Ultimate Warrior was a team of warriors looking for India’s ultimate warriors. The show will always be close to my heart not just because its primary theme is Martial Arts but also because of the bonds that we made on this show. Despite belonging to diverse backgrounds, we all had one thing in common, that is extreme dedication and passion to do the unthinkable.”

He further added, “This show was not a conventional reality format. With real challenges and tasks being performed under extreme conditions, the contestants were much more prone to injuries, breakdowns, and emotional outbursts but it was heartening to see how they uplifted each other in those moments of crisis whilst keeping their competitive spirit intact. Not just the contestants, the same spirit spilled over to the entire production unit as well who stayed put at all times and strongly supported us to be the best version of ourselves. I am sure each and every person who has been a part of this series has gone back home, a changed person! I definitely have!”

‘India’s Ultimate Warrior ‘, a unique offering in the action reality genre marked the digital debut of India’s primal action superstar, Vidyut Jammwal, who debuted as a Dojo master. The show also featured the OG Khiladi Akshay Kumar as honorary Dojo Master in the third special episode. Supporting him in his quest to find the nation’s ultimate warrior, Vidyut had 4 professional mentors, namely Shifu Kanishka, Shaun Kober, Bi Nguyen AKA Killer Bee and Mykel Hawke to guide 16 diverse contestants as they battled it out to win the prestigious title. This never-seen-before action extravaganza is currently streaming on discovery+ followed by its television premiere on Discovery Channel Monday to Wednesday at 8 PM.

‘discovery+’, an exciting D2C streaming app is launched to satiate the unmet need of a differentiated product, offering premium real-life entertainment. Priced competitively at INR 399 per annum, the app is developed and curated specifically for India. Discovery+ offers thousands of hours of exclusive content across 55+ genres, including Science, Adventure, Food and Lifestyle, in 7 languages including Hindi, English, Tamil, Telugu, Malayalam, Kannada and Bengali. The premium subscribers have access to a pool selection of never-seen-before Premium Discovery titles, must-watch documentaries, India originals and exclusive acquisitions. Free users of the app have access to all-time favorites from the Discovery library.