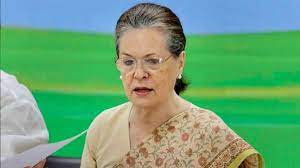 Delhi, 27th July 2022:Congress president Sonia Gandhi’s was reportedly asked questions on her involvement with the National Herald newspaper and the Young Indian Pvt Ltd.Sonia Gandhi, 75, was asked over 70 questions in the last two days of questioning, the sources said. She was at the Enforcement Directorate’s office for eight hours. She reached the agency’s office around 11 am this morning. ED officials said Sonia Gandhi was “quick” in answering questions.

On both days of questioning, the Congress president went to the probe agency’s office with daughter Priyanka Gandhi Vadra, who was present with her medicines. Medical staff were also kept on standby.

On each day of the Gandhis’ questioning in Delhi, the Congress has carried out massive street protests and has clashed with the police, undeterred by heavy security.

New president revealed that her name ‘Droupadi’ is not her original name.