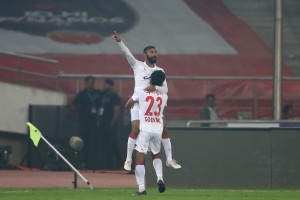 The former Chelsea midfielder and Delhi Dynamos captain was the most influential player as he scored two goals and created two more to help his team waltz to the top with 16 points from nine matches. Richard Gadze gave Delhi Dynamos the lead in 15th minute before Malouda made it 2-0 in 25th minute. Bernard Mendy provided brief hope for Chennaiyin FC in the 37th minute but Delhi were unstoppable in the second half with Kean Lewis making it 3-1 and Malouda himself completing the rout.

The 1-4 defeat will be among Marco Materazzi’s most embarrassing in the ISL and follows the 1-3 defeat in the opener against the same opposition at home. Delhi incidentally is coached by Gianluca Zambrotta who was Materazzi’s teammate when Italy won the World Cup in 2006.

The loss left Chennaiyin FC with plenty of work to do for the remaining matches, coming as it did after three successive draws. The defending champions are placed fifth with 10 points from eight matches. The opening goal happened in the 15th minute when Malouda won a ball from Siam Hangal from his own half and took a shot on goal which was saved by goalkeeper Karanjit Singh but Gadze was lurking around to pounce on the rebound, before he could be tackled by defender Mehrajuddin Wadoo.

Malouda made it 2-0 in the 25th minute after combining well with Gadze. The Ghanaian did well to wriggle past Brazilian defender Eli Sabia Filho and set it up for Malouda to finish with a well placed left-footer.

Chennaiyin FC fought their way back into the game through their captain Bernard Mendy who scored a wonderful goal. He picked up a ball from Raphael Augusto, made a fine run escaping many Delhi players and then smashed it past the Delhi goalkeeper.

In the second session, Malouda continued dominating play and created Delhi’s third goal of the night. He did well to hold on to the ball inside the box and then passed it on to Lewis who did extremely well to shoot it past the Chennaiyin goalkeeper.

There was still one more goal left to be scored and it was Malouda who had his second of the night. Marcelinho’s corner kick was headed towards Malouda by Badara Badji and the Frenchman made no mistake to turn it home.

ATK, NorthEast look to pick up the pieces