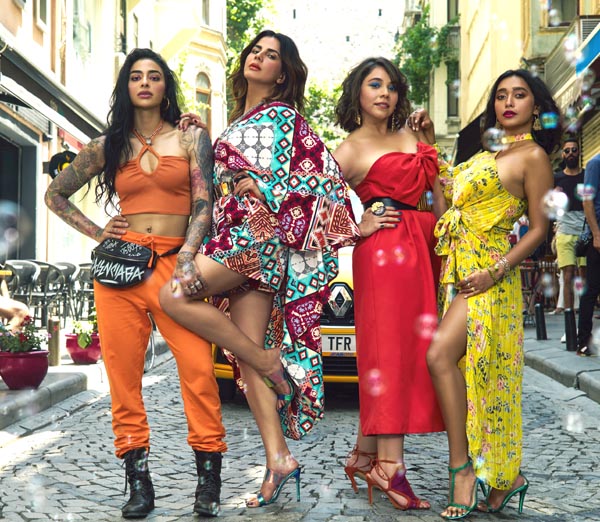 Kirti Kulhari– The concept of Amazon Original Four More Shots Please! intrigued me from the first day of learning about the show; and, it comes as no surprise that my excitement doubled when we started the shoot of Season 2. Personally, 2019 has been a milestone for me, starting with the phenomenal success of Four More Shots Please! and then being part of some of the biggest films of the year. I believe that each viewer will see a little bit of themselves in each character and I really hope they love the second season as much as they did the first.

Bani J- I’ve said this a couple times before, and would like to repeat it because it felt serendipitous to me that I was approached to play Umang. Not because she has an affinity to lift weights, but because of her journey, her story and this unshakable conviction with which she does things in her life. Uprooting herself from home, being in love, being her-self. The more time I get to play and be Umang the more completely I am able to understand and create of her. It’s an unusual and quite cool an experience for me – being able to play the same character for seasons in a go, it’s hard to explain but I think when people watch they’ll get it.

Maanvi Gagroo- Life comes to a full circle as we are all set to launch the second season of Amazon Original Four More Shots Please! This show, particularly Siddhi, is very close to my heart; after shooting for two seasons, I can now understand Siddhi Patel better and why she does what she does on the show. She is a relatable inspiration each time she turns her weaknesses into her biggest strengths. Four More Shots Please Season 2 is our labour of love and we are certain that it will receive a lot of love from our audiences.

Sayani Gupta– The second season of Amazon Original Four More Shots Please! feels nothing less than coming back in a familiar environment and striving to do something even bigger, better, deeper than the first season. There is a special charm in reuniting and collaborating with the same gang of co-actors, makers, creators. The first season was infinitely successful and received an unprecedented love from the fans. It truly is beyond dreams that a forward, rule-bending show like Four More Shots Please! would receive so much love and craze from fans from all across the board, from all parts of the country and different parts of the world and from all age groups and gender. It also surpassed all pre-conceived notions that a show made by women on women, would be about male- bashing. Each character had something people could relate to and connect with. The beauty of the Four More Shots Please! is that it celebrates 4 women who are so different, not only in the way the look bit also their personalities. The women in the show are flawed but they completely own it. The show also celebrates women with agency, which is the need of the hour. That every girl out there should have the right to choose her life’s course, backed my education and strive for financial independence. The second season will be twice as special. You will see the girls having more fun, the friendship growing deeper and fierceness growing stronger but also them accepting their vulnerabilities. I can’t wait for the fans who have been writing in everyday for the second season, to watch the show!

The second season of the Amazon Original Series, Four More Shots Please!, will launch on 17 April, 2020 on Prime Video in India and around the world in more than 200 countries and territories.

Fans can catch the trailer of the Amazon Original Series, Four More Shots Please! as it launches on 31 March, 2020.

Four best friends will cuddle up again and tell the world to sit up and pay a little more attention to what women truly want. Girls will always be girls around their girls – the problems remain simple yet complicated and funny to each other. They will make new mistakes, but love each other little more fiercely and choose themselves over society’s expectations.