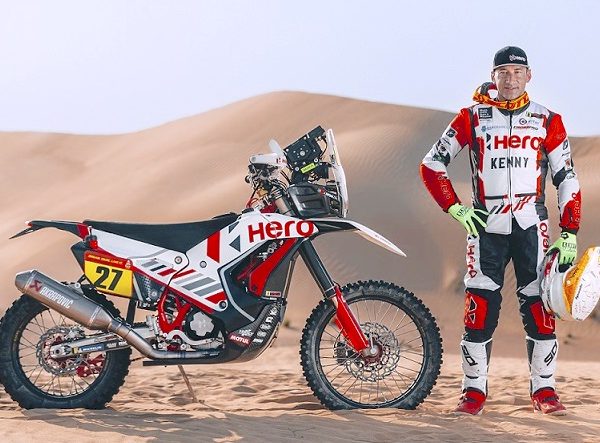 TO PARTICIPATE IN DAKAR ’22 WITH A TWO-RIDER SQUAD –

Participating with a two-rider team in their sixth consecutive Dakar Rally, Hero MotoSports – the motorsport team of the world’s largest manufacturer of motorcycles and scooters – Hero MotoCorp, will take on the 2022 edition of the world’s most challenging rally with Franco Caimi and Joaquim Rodrigues.

Both riders have achieved podium finishes in the Cross-Country Rallies Championship this season, at the Silk Way Rally and Abu Dhabi Desert Challenge respectively, with Joaquim finishing the Championship in the fourth position.

This will also be the sixth Dakar for JRod, who has been with the Team since its inception in 2016.  It will be the first for Franco in Hero MotoSports colors, following his signing in April 2021. However, Franco is no stranger to the Dakar, having participated in the Rally on five previous occasions.

The duo of Joaquim and Franco will take on the challenges of the Dakar in Saudi Arabia astride the Hero 450 Rally bike, which now offers improved top speed and acceleration.

With five years of impressive international rallying under its belt, Hero MotoSports is today a well-renowned name in the global racing circuits. The year 2021 has been a significant one for the team, as the team riders made their way to podiums in various rallies throughout the season.

Hero MotoSports Team Rally wishes a speedy recovery to the other team pilots – Sebastian Buhler, winner of the Hungarian Baja 2021, who was on the roster for the Dakar 2022 but had to withdraw due to an injury at the Abu Dhabi Desert Challenge, and Indian ace CS Santosh, who is recovering from the crash he suffered in the 2021 edition of the Dakar Rally.

Dakar 2022, the third consecutive edition in Saudi Arabia, will run for 12 stages over 14 days. The rally kicks-off on January 1, 2022 with a short Prologue stage, and then travels through various cities across the length and breadth of Saudi Arabia. A rest day in the capital city of Jeddah on January 8 is the only respite that the competitors will have on a route that covers 3400 kms of racing distance. Covering a total of 8000 kms, including the liaison stages, the competitors will return to Jeddah for the finish podium on January 14, 2022. A total of 430 vehicles are expected to hit the start line, with 149 of them in the motorcycles category.

Wolfgang Fischer, Team Manager, Hero MotoSports Team Rally said, “We have had a great year so far and we look forward to starting the next year with a strong performance at the Dakar 2022. The preparations for the Team have been good, and even though we are two riders short, we are confident of a great campaign at the Dakar. The bikes have also been performing very well, and we are excited to be back for our sixth tryst with the ultimate test. I also wish our team riders CS Santosh and Sebastian Buhler a speedy recovery, and hope to see them back in the camp soon.”

Joaquim Rodrigues, Rider, Hero MotoSports Team Rally said: “It feels great to be going back to the Dakar after a year of consistent growth for myself and for the entire team. The team’s performance in the season so far has been praiseworthy. Following my best ever finish at the Dakar in 2021, the year also brought me my first FIM Championship podium at the Abu Dhabi Desert Challenge. Along with the team, I have been training particularly hard for the Dakar since then, and I look forward to a great month ahead.”

Franco Caimi, Rider, Hero MotoSports Team Rally: “My first year with Hero MotoSports has been an exciting one, and I am happy to have the opportunity to represent the team at the Dakar Rally 2022. We are entering the Dakar after some impressive runs in recent months, including a podium finish for me at the Silk Way Rally. I’m confident that our current momentum will bring us great results at the Dakar.”