Moving past the unfortunate incident of Stage 4, Hero MotoSports Team Rally continued to move forward in their Dakar 2021 campaign with a solid performance in Stage 5 today.

After Stage 5, both the riders are now placed inside the Top 20 in the overall rankings with Joaquim Rodrigues on 19th and Sebastian Buhler on the 20th position.

It was the turn of Sebastian Buhler today to step up and post gains with a 20th place finish in the stage. Joaquim Rodrigues also fought off a very tough stage to finish in the 22nd position. The 456 km stage lived up to its expectation of being a very hard one with a tough dunes section, stone littered tracks and tricky navigation designed to test the patience and tyres of the competitors. Both team riders kept their nerves steady and brought a tough stage home.

Hero MotoSports Team Rally rider C S Santosh is currently receiving treatment at the Saudi German Hospital in Riyadh, after a high-speed crash on Wednesday in Stage 4 of the 2021 Dakar Rally.

He has no major physical injuries except for the dislocated right shoulder and head trauma.  The latest scans have also shown no major issue that could impact his full recovery.

The medical team attending to him have decided that the best approach to manage the injury is to reduce the body functions to a minimum and keep him in a sedated condition or an artificial coma. He is receiving the best possible medical care and will continue to be under constant observation for the next few days.

We express our deepest gratitude and thanks to the riders who extended their help to Santosh. We also want to thank the organizers for getting the medical and rescue teams on the spot in quick time and airlifting him to reach the hospital quickly.

For Stage 6 tomorrow, the rally will move to Ha’il, with 448 kms to be done under the clock.

Joaquim Rodrigues (Competitor No. 27) said, “It was a really difficult stage with a lot of navigation and a lot of rocks. I had a minor crash in one of the river beds that was full of rocks and a few screws from my navigation tower came off lose. I had to fix the bike and after that I lost my focus and lost my way a few times. Then I just decided to take it easy and bring the bike home so I am happy to be back at the bivouac safely to fight for another day. After a tough day it was such a great news to hear that Santosh has no major concerns with his injury and will recover well. We are really happy to hear this. ”

Sebastian Buhler (Competitor No. 24) said, “Today was a very tough stage. We had everything from tricky navigation, to a lot of dangerous rocks and a lot of dunes. So I think it was a very good day for us to finish without any major incident. But the best news from today is to hear that Santosh is out of danger and is getting better. That’s the best part of today for us here in the team.”

Provisional Overall Rankings at the end of Stage 5 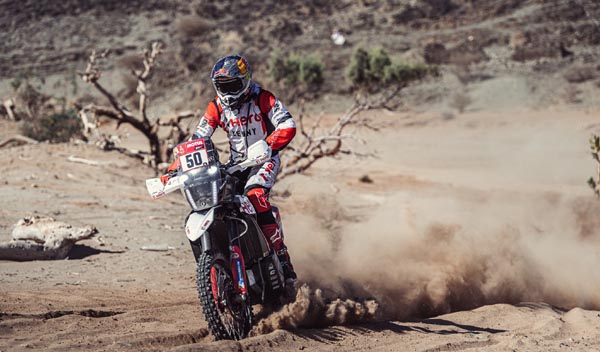 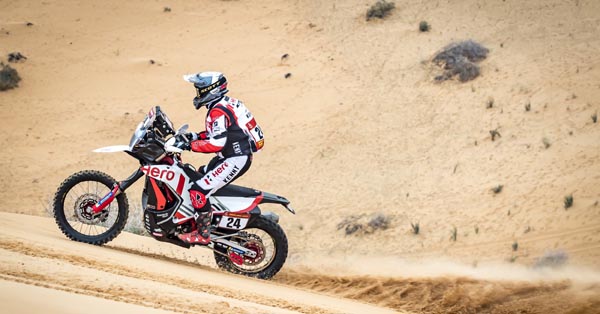