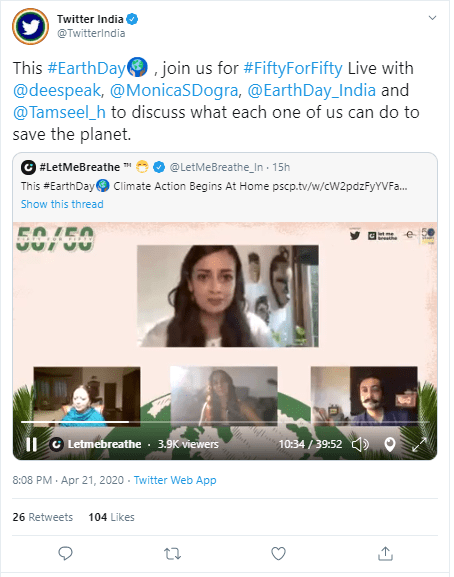 This year has brought so many firsts and new experiences and this year’s Earth Day, April 22, will certainly be among them. While people can’t get outside and participate in the same outdoor and collective experiences in person, they are celebrating the Earth on Twitter this year.

The conversation on Twitter has spiked 285% around the discussion of ‘action’ and ‘innovation’ in sustainability and there have been more than 1 million Tweets tying this period of COVID-19 to impacts on the environment and 20 million unique Tweets about the environment since last Earth Day.

Ahead of Earth Day, Twitter has launched a new #EarthDay2020

emoji to encourage environmental conversations. To commemorate the 50th Earth Day, Twitter India (@TwitterIndia), Let Me Breathe (@LetMeBreathe_In) and Earth Day Network (@EarthDay_India) are partnering for #FiftyForFifty: a campaign that highlights 50 years of Earth Day and gives a common platform to 50 crowdsourced steps that we can take in our daily life to combat climate change and live sustainably.

Actress Dia Mirza (@deespeak) and singer-actor Monica Dogra (@MonicaSDogra) too participated in a Live Twitter Panel on April 21, 2020, to talk about 50 years of #EarthDay2020

and climate action. You can also watch the chat from last night to take a few points that Dia Mirza (@deepspeak) has advised for sustainable living #EarthDay. Nature is healing: Of late, as the COVID-19 pandemic is keeping people indoors, reduced industrial and human activities have led to the rejuvenation of nature. Twitter has been witnessing volumes of discussions around how the lockdown has given the environment a chance to revive its lost glory.

Tweet, Tweet! It’s a bird: While people continue to spend time at home, they are taking up #BalconyBirding and reading books on nature.

Reading Nature (@ReadingNature), a book club on Twitter, asked its followers to talk about their favourite #naturebooks on #EarthDay

, and people are sharing some interesting reads through videos.

To bring out more focused conversations on sustainability, Let Me Breathe (@LetMeBreathe_In) has also launched three #FiftyForFifty Twitter Lists on topics like Balcony Birders, Climate Activists and Sustainable Fashion. A Twitter List is a curated group of Twitter accounts. You can create your own Lists or subscribe to Lists created by others. Viewing a List timeline will show you a stream of Tweets from only the accounts on that List, usually around a particular topic.

Organisations such as the UNESCO MGIEP (@UNESCO_MGIEP), WWF India (@WWFINDIA) and Earth Day Network India (@EarthDay_IN) are organising virtual concerts with performances from the finest musicians as a tribute to the Earth.

Let’s come together this #EarthDay

to pledge our solidarity to the planet and collectively work for sustainability.