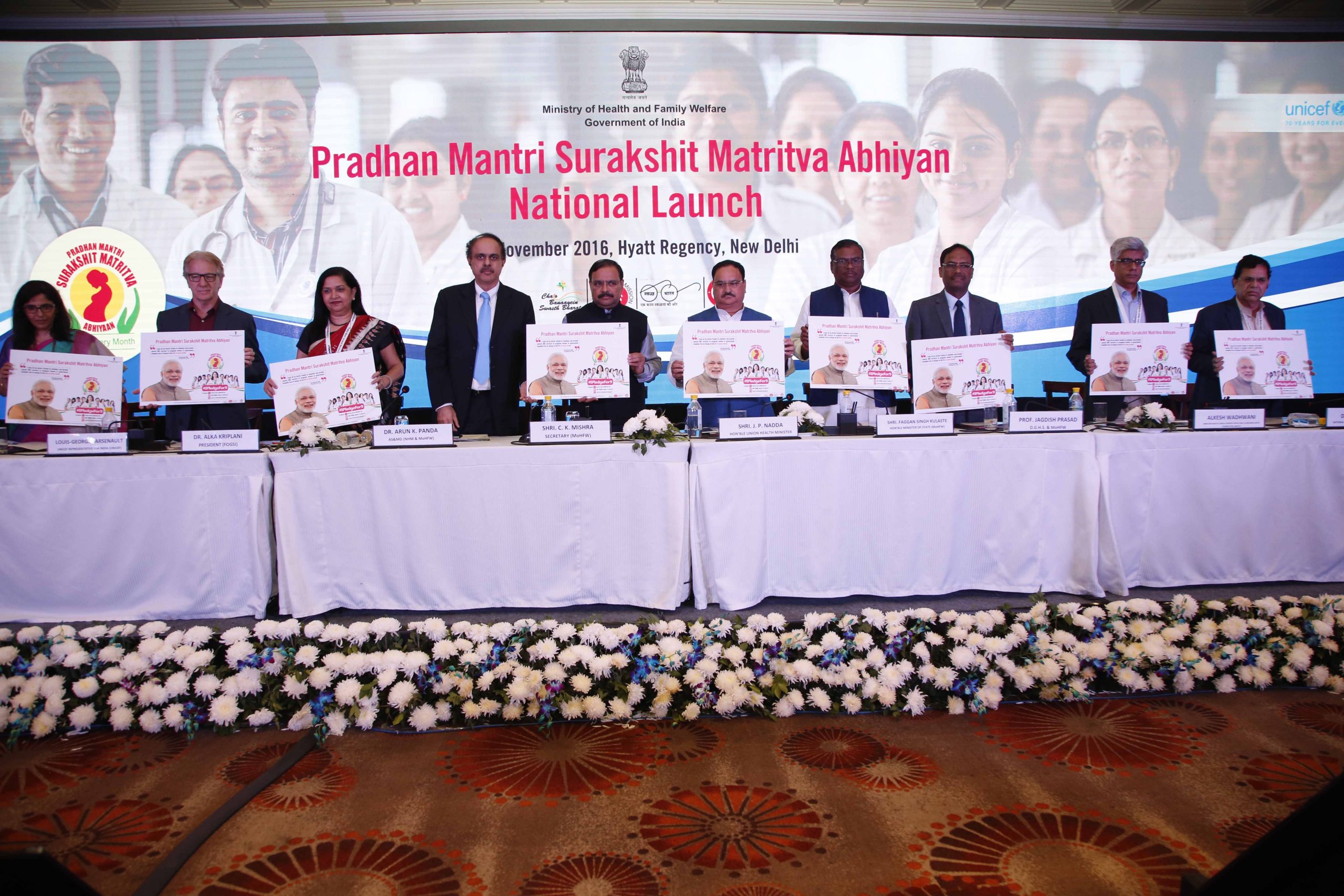 “Carrying forward the vision of our Hon’ble Prime Minister Shri Narendra Modi, the Pradhan Mantri Surakshit Matritva Abhiyan (PMSMA) is aimed to reduce maternal and infant mortality rates through safe pregnancies and safe deliveries. The national programme will provide special free antenatal care to about 3 crore pregnant women across the country in order to detect and prevent high risk pregnancies.” This was stated by Shri J P Nadda, Union Minister of Health and Family Welfare at the launch of Pradhan Mantri Surakshit Matritva Abhiyan (PMSMA), here today. Shri Faggan Singh Kulaste, Minister of State for Health and Family Welfare, Shri C K Mishra, Secretary (Health) and Mr. Louis George Arsenault, UNICEF Representative to India and were also present at the occasion, along with other senior officials. Representatives from IMA, FOGSI, Rotary International and other development partners were also present. Shri Nadda stated that the nationwide programme will provide fixed day assured, comprehensive and quality antenatal care to pregnant women on the 9th of every month. Pregnant women can now avail of a special antenatal check-up in their second or third trimesters at Government health facilities provided by gaenocology specialists/ physicians with support from private sector doctors to supplement the efforts of the Government sector, Shri Nadda stated. These services including ultrasound, blood and urine tests will be provided in addition to the routine antenatal check-ups at the identified health facility/outreach in both rural and urban areas. One of the aims is to identify and follow-up on high risk pregnancies in order to reduce MMR and IMR, he added.

Pointing out that private practitioners will play a critical role in the success of this programme Shri Nadda said that this needs to be made a national social movement which shall engage the doctors from the private sector and other stakeholders. Shri Nadda administered the #IPledgeFor9 Pledge for urging all to support this programme. The Health Minister appealed to the private sector doctors to provide voluntary services to supplement the efforts of the Government. “I call upon all stakeholders to be a part of this national movement and work towards reduction in maternal and infant mortality”, he stated.

The Health Minister pointed out that India is poised to work towards achieving the Sustainable Development Goals (SDGs) in maternal and child healthcare. He added that India has made substantial progress on several indicators in the recent years and stated that its national health indicators like Infant Mortality Rate (IMR), Maternal Maternity Rate (MMR), Total Fertility Rate (TFR) and under five mortality are declining faster a than the world pace. “With Pradhan Mantri Surakshit Matritva Abhiyan (PMSMA) the Ministry aims take this forward and improve upon the quality and coverage of health facilities,” Shri Nadda elaborated.

Addressing the gathering, Shri Faggan Singh Kulaste, Minister of State for Health and Family Welfare said that this is a significant step towards reducing maternal mortality in India. We are targeting women who have not received or dropped out of ANC check-ups and a minimum package of investigations and medicines such as IFA and calcium supplements, would be provided to all pregnant women attending the PMSMA clinics. Apart from diagnostic and treatment services, counselling pregnant women is critical — especially in cases of high-risk pregnancies, he stated. Shri Kulaste further added that support from state governments, apex bodies like the IMA and the FOGSI, Lions and Rotary clubs as well as development partners, have been important in getting the campaign off the ground.

Highlighting the importance of this initiative, Shri C K Mishra, Secretary (HFW) said that while much progress has been made in reducing maternal and neonatal mortality, the PMSMA programme is based on the premise that if each and every pregnant woman in India is examined by a physician and appropriately investigated at least once during the pregnancy and then appropriately followed up, the Abhiyan can avoid many preventable deaths.

At the function Shri J P Nadda also launched the PSMA Web Portal & a Mobile Application along with the 360 degree communication package to raise awareness about the campaign.