MobileODT launches its new device, Thermoglide, in association with GenWorks, to screen & treat cervical cancer in a single sitting

Appendicitis can be life threatening; do not ignore it, advice doctors 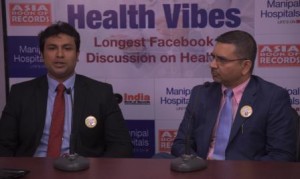 Bengaluru, India, August 11, 2017: Manipal Hospitals, Bengaluru made its way into the record books as it organized a Facebook Live Video Discussion with the most number of doctors covering the most of the health topics in the least amount of time, on July 20, 2017. The event was held with an intention to create awareness about the symptoms related to various chronic diseases plaguing our society, such as Heart Disease, Diabetes, Cancer, and other ailments related to kidney disorders, depression, blood related disorders etc. The event got its mention in the prestigious Asia Book of Records for being the lengthiest Facebook Live Chat by most number of doctors ever, covering the most number of health topics in a record time. Dr. Ajay Bakshi, MD, and CEO, Manipal Health Enterprises while opening the session said that with more than hundred doctors addressing about 100 different health issues, this initiative would benefit millions of people since it was hosted entirely on a digital platform.The event, known as ‘Health Vibes’, saw over 100 doctors speaking about 101 topics covering different branches and fields of medicine. During the course of the marathon discussion, the doctors offered their invaluable insights and opinions about the many ailments afflicting the present generation. Going a step further, the event progressed well beyond the mandate of merely creating a record; as the session went on to feature a total of 102 doctors speaking on 100 different topics in a time span of 10 hours. These doctors belonged to a wide range of specialties including cardiac sciences, pediatrics, orthopedics, neurosciences, genetics, dentistry, dermatology, renal sciences, obstetrics, and gynecology etc.

Some of the key nuggets of information were related to the timely diagnosis of diseases such as Tuberculosis, elementary first aid measures like CPR which every person ought to know irrespective of his/her profession. The discussions also covered symptoms of dengue, dementia, occurrences of a migraine and diabetes, and much more.

That this live chat had a positive impact on quite a large segment of the population can be gauged by the fact that it had more than 10,00,000 views, and received more than 1,00,000 reactions. More than a thousand questions were asked by the viewers, many of which were included in the face-to-face discussion in real time. This initiative by Manipal Hospitals has definitely reached far and wide, and resulted in positive vibes for the health of all!

Hospitals, BMC and Citizens of Maharashtra need to work together to avoid another Swine flu outbreak: AOH