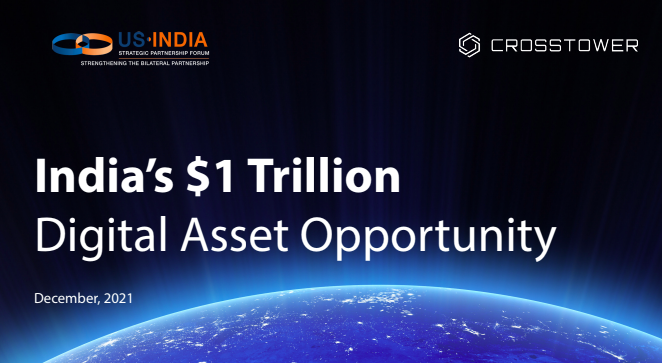 India, 06 December 2021: CrossTower, one of the world’s fastest and leading crypto and digital asset exchanges in partnership with US-India Strategic Partnership Forum (USISPF) released its research report on “India’s USD 1.1 trillion Digital Asset Opportunity”. The report highlights India as having the potential to add USD 1.1 trillion of economic growth to its GDP by 2032. It shows how India can leverage the digital asset opportunity by adopting Web 3.0 and why blockchain technology is self-sufficient for digitising India’s financial ecosystem.

In 2013, the market capitalisation of the digital asset market was approximately USD 1.5 billion. The report by CrossTower suggests that today, market capitalisation is at nearly USD 3.0 trillion. It also states that most of India’s USD 1.1 trillion in the total economic growth in next 11 years can come from ancillary digital asset-related businesses that are yet to be invented.

Some of the key highlights from the research report are as follows:

Dr. Mukesh Aghi, President and CEO of USISPF, said, “India is poised for growth to become a USD 5 trillion economy by 2024-25 as envisioned by Prime Minister Narendra Modi. Digital assets are expected to have tremendous potential in the next 11 years across countries, due to their rapid adoption. They are expected to help India achieve the GDP of USD 5 trillion economy.”

Kapil Rathi, Co-founder and Chief Executive Officer of CrossTower, said, “Data shows that the citizens of India tend to be natural visionaries and with Web 3.0, India has the opportunity to harness its core resources — its technologically savvy youth — to be a global leader in digital assets and Web 3.0.  With the right policies and regulatory framework, India’s regulators can bring safety, combined with hope and prosperity to India.”

Kristin Boggiano, Co-founder and President of CrossTower, said, “The Internet sector contributed approximately 10 per cent to US GDP in 2018 and 16 per cent to India’s GDP in 2020. Given the Web 3.0 growth across all industries, digital assets and blockchain technology is expected to create profound impacts on economies globally. With the right framework, India is positioned to be a key catalyst to the new technological era.”

The research reports also highlight the sectors that blockchain technology has the potential to contribute to and transform:

The report was released at Oberoi Hotel in New Delhi in the presence of Dr. Mukesh Aghi, President and CEO of USISPF; Kapil Rathi, CEO and Founder of CrossTower and Kristin Boggiano, Co-Founder and President of CrossTower; along with other delegates present at the launch.

Founded in 2019, CrossTower, ranked fourth in the world by Cryptocompare, is a crypto exchange with capital market capabilities. CrossTower empowers smart money to push the limits of what is possible. CrossTower provides the best-in-class services and products tailored to the needs of retail traders and institutions, including hedge funds, family offices, endowments, pensions, and other market participants. CrossTower leverages its vast experience in trading, technology, operational infrastructure, innovative pricing, regulations, and compliance to make cryptocurrency and digital assets accessible to retail and sophisticated institutional market participants. CrossTower has offices located in the US, Bermuda, and India.

The US-India Strategic Partnership Forum (USISPF) is committed to creating the most powerful partnership between the United States and India. As the only independent not-for-profit institution dedicated to strengthening the U.S.-India partnership in Washington, D.C. and in New Delhi, USISPF is the trusted partner for businesses, non-profit organizations, the diaspora, and the governments of India and the United States.