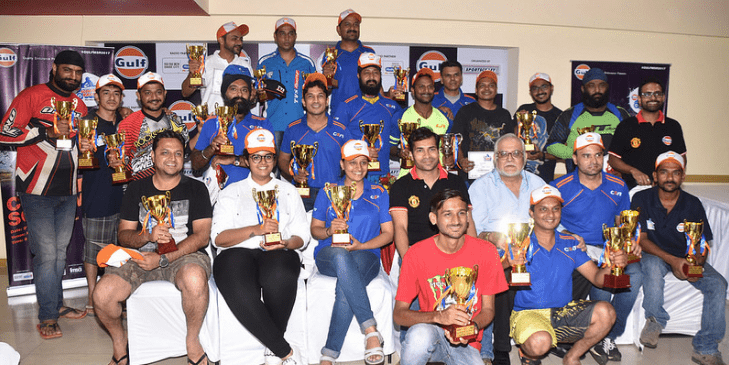 Rank outsider Venkatesh Shetty of Lorraine’s Racing, riding an Aprilia SR 150, overcame a strong field that included a host of former champions and tough conditions to emerge triumphant in the popular two-wheeler time trial, run over the backwoods of Navi Mumbai.

In a field of 54 riders , the Mumbai rider, rode judiciously over the dirt tracts to win the grueling 35-km rally in a timing of 25 minutes and 15 seconds in penalties.

The rally was flagged off by from Hotel K Star in Belapur CBD by popular Radio Jockeys Rohit and Harshit.

Heavy rain over the last few days made riding on the gravel-laden, winding course dicey. Under the circumstances, riders had to exercise extreme caution and control while negotiating the steep inclines, hairpin bends and water-logged stretches they encountered along the course. Some of them took a tumble or two and some even damaged their scooters in their bid to clock good timings in the competitive sectors.

There were two women who braved the challenge admirably. Mumbai’s Nidhi Shukla of Team Ceat, riding a Honda Activa, completed the course in 00:37:13 seconds, while Priya Gala, astride a Suzuki Access, was home in 00:42:19 seconds.

Special mention must be made about the first-timers who went through the motions with equal élan. The best of them was Kolhapur’s Aniket Korgaonkar, astride a TVS Jupiter. He completed the course in 00:32:27 seconds and was deservedly awarded the late FirdoshVajifdar trophy and adjudged the best Kolhapur rider for his spirited effort.

Speaking during lunch later, the riders applauded the challenge Sportscraft had plotted. They asked how they were to able to chalk out such a challenging course, which even utility vehicles would have found difficult to negotiate.