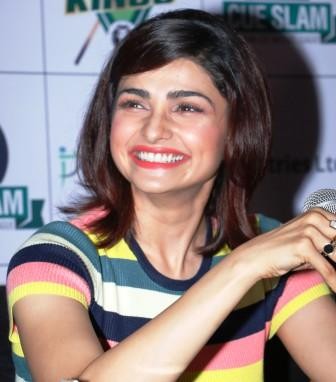 22nd August, 2017 in Ahmedabad-  Team owners Dhwanil Bhavnagari,  the youngest team owner in India & Ashish Shah, Chairman & MD of Padmanabh Sports Pvt. Ltd. Subsidiary Of Padmanabh Industries Ltd. addressed the media about their team “Gujarat Kings” who have already carved their names as winners in two matches of the first-ever “Cue Slam-Indian Cue Masters League”, to be held from August 19 to 25 this year in Ahmedabad.

Dhwanil Bhavnagari,  the youngest team owner in India said “Cue Slam-Indian Cue Masters League is the first of its kind format introduced in India. It is extremely fast paced game, we have to adapt ourselves just like the audience likes it. People like fast paced games, they like unpredictable results, they like upsets, they like drama and that’s exactly what we aim to provide to the audience”

Prachi Desai said “I normally keep visiting Ahmedabad, Gujarat but this is the first time I have come for a sports events. Dhwanil being so young, he has proved that age doesn’t matter. If you have the talent, it can make you reach anywhere no matter what age you are. It is great that he is vesting his belief &  giving platform to other games like Snooker & pool game. Given a chance I would also love to play snooker with the team players”