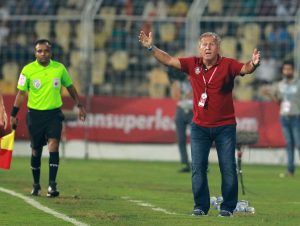 FC Goa’s 0-2 loss against Delhi Dynamos at Fatorda on 30th October might have further dented the chances for Zico managed club to make it to the knock-out stage of ISL 2016. Last year’s finalist FC Goa is currently reeling at the bottom of the table with just four points from seven matches.

However, Zico may have reasons to keep believing that his team’s chances are still not over despite being at the bottom of ISL points table.

“We are still breathing, and as long as we are breathing, there is hope,” says Zico indicating a look at the Points Table where the leader (ATK) with just eight points difference (at 12 points) is not very far to catch up even for the bottom placed FC Goa.

Zico knows he now need five wins from the second half of seven matches in the remaining ISL 2016 league journey, or 15 points to qualify for the knock-out stage.

“Twenty points would be good enough to qualify this season, but going by the other (team) results so far, it can even be less than that,” said Zico.

The FC Goa coach probably is hinting towards the number of draws ISL 2016 has seen in the first seven rounds which may come to the aid for the Gaurs.

In ISL 2014, both finalist Kerala Blasters and Atletico de Kolkata qualified for the semi-finals with 19 points each, while for ISL 2015 the stakes went a little up with Delhi Dynamos and Chennaiyin FC needing 22 points each to make it to the knock-out stage. Last season the competition was so intense that NorthEast United FC despite having 20 points couldn’t qualify for the semi-finals.

But it’s turning out to be different time this season of ISL 2016. A top of notepad calculation indicate ISL 2016 season will see any team with 18 points and above would have chances to make semis.

Trends at the ISL 2016 half way stage suggest, there are a lot less results than the first two editions. ISL 2016 has already witnessed 10 draws out of 27 matches played so far, thus indicating that this season is turning out to be very tight and would mean even the top placed teams on points table are cannot take their position lightly. An FC Pune City at 7th place in the standing today with 6 points or bottom placed FC Goa with 4 points are just two quick wins away to displace any of the top four clubs.

Another interesting trend noticed this season of ISL so far is that the away teams gathering more wins than the home team. For the first time in ISL history, teams are winning more away from home. In fact, according to statistics of the first 27 matches, away teams have won more matches as compared to the home team’s winning record. Off the 27 matches so far, 11 matches have gone in favour of away team while 10 have been drawn and its only 6 times a home team has won in front of its crowd.

Mumbai City FC is the best example of this trend. For the last two years of ISL, Mumbai City had won only one match of their away games, but in 2016 Mumbai have already won two matches this season, after putting it across FC Pune City in the opening game and Atletico de Kolkata in the last game. On the other hand, FC Pune city, FC Goa or Delhi Dynamos are yet to win a single game at home.

To mark the festivities in the country, FC Goa and Delhi Dynamos FC players and respective Head Coaches celebrated Diwali ahead of their match in Goa today.