Anvayaa organizes a Fire Side Chat on Dementia Care Mumbai, August 18, 2022: Malad-based Bellacasa Society joined the nation in celebrating ‘Azadi Ka Amrit Mahotsav’ with great passion and patriotic fervor on the eve of Independence Day. The festivities included lighting the whole building in tricolor and every resident of the building had put the Tricolour Indian Flag in their homes from 13-15 August 2022 to support Honourable Prime Minister Narendra Modi’s ‘Har Ghar Tiranga’ campaign to celebrate and commemorate 75 years of Independence.

Bellacasa Building celebrated the 75th year of India’s independence function with flag hoisting by committee member Heena Beena, which was followed by a host of patriotic speeches by Suhana Riyaz and Yusuf Iqbal Kaseem Azmi. The waving flag, the sound of the national anthem, and the tricolored balloons let in the society lobby by “Balon Galore” managed by Naushad Ali and Anjum had everyone at the venue have their chests swelled up with patriotic ardor. Later a series of colorful programs and sports events were organised by the Bellacasa Society committee members such as Sujeet Beura, Sajid Jabir Ansari & Fakhruddin Khan. Renowned Singer Danish Iqbal Sabri and resident of Bellacsa was present during the event as a chief guest of the function. The different programs such as Quiz competitions, singing, and dancing activities were presented by the children of the Bellacasa.

The event ended with a very delicious buffet of Veg and non Veg arranged by the Rajjab Catering Sevice.

The event would stay fresh in the minds and memories of all members of the Bellacasa society. 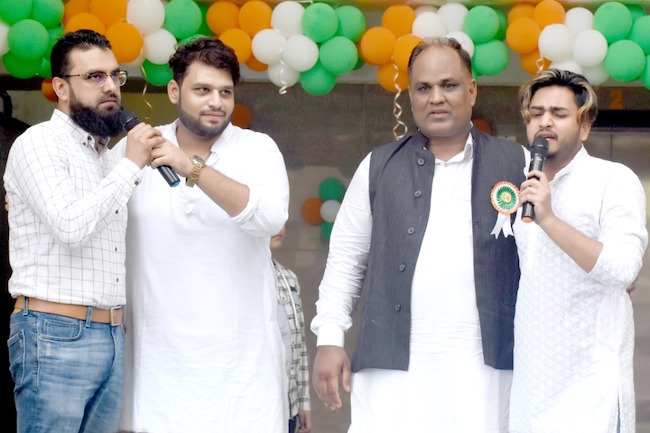 Speaking on the occasion, Mr. Iqbal Kaseem Azmi, Secretary – Bellacasa remarked “Our society is a cosmopolitan society and we live like a secular micro India. We need to be united in all celebrations and set an example of unity to other societies, the benefits of living together in harmony. This 75th Independence day gave us an excellent opportunity to bring together the whole society in enjoying the fun-filled event, and the bond of patriotism in all the people from different communities. Today after a long time I have seen such happiness and joy in the children and their parents.”

The Chairman of Bellacasa Society and Editor of MTI News Mr. Riyaz Ahmed addressed the gathering by sharing that “The idea behind the initiative is to bring the entire society together and invoke the feeling of patriotism in their hearts to support our PM Modi’s ‘Har Ghar Tiranga’ campaign. The Azadi Ka Amrit Mahotsav is the celebration of 75 years of freedom marking the struggle and the achievements of Indians in every sphere of life. Our country was left with very little when it got freedom and today it is one of the fastest developing countries and economies in the world. Mr. Ahmed further added children should know  the essence and sacrifice of our Freedom Fighters for our country India, We as responsible citizens of our country need to put in our efforts in taking care of the environment in all the ways we can and live with nature and with all other human beings in perfect harmony.”

Mr. Sujeet Beura – Treasurer, Bellacasa added “Today is a very memorable day that will remain entrenched in the memories of all of us, after a long time all the members of the society along with the tenants and their whole families have got together in such large numbers and celebrated this day together and we have succeeded to celebrate this grand event in our society and one of the best function happened in our locality.”

The program ended with Antaksri and a live orchestra by Royal Band performing patriotic songs by Sameer Khan Royal and Khan Amaan followed by a prize distribution ceremony.

123 Indian firms being presented with highly prized accolades for their health, safety, and wellbeing initiatives by the British Safety Council, UK