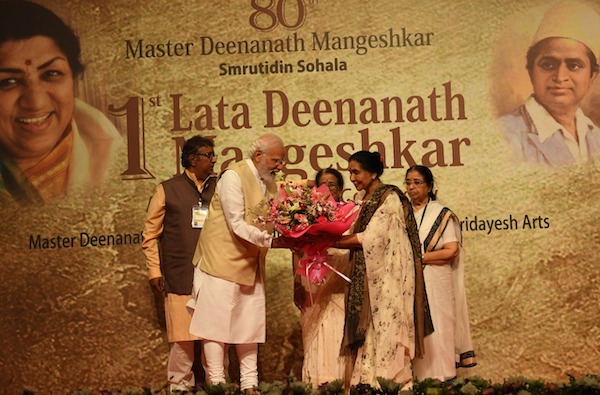 The Award instituted in memory of Lata Didi by the Master Deenanath Mangeshkar Smruti Pratishthan Charitable Trust is conferred on an individual “who has made path-breaking, spectacular and exemplary contributions to our nation, its people and our society.”

Prime Minister Shri Narendra Modi in his speech fondly remembered his close association with Lata didi and said he was humbled to be present to receive the 1st Lata Deenanath Mangeshkar Award. He began his speech invoking the power of music.

Highlights of Prime Minister’s speech are as follows :

“What can be a greater privilege than to have received the love of a sister from Lata Didi, who has given the gift of love and emotion to generations”

▪︎ “I dedicate this award to all the countrymen . As Lata Didi belonged to people, this award given to me in her name also belongs to people”
▪︎ “She gave voice to India before independence, and the country’s journey of these 75 years has also been associated with her voice”
▪︎ “Lata ji worshipped music but patriotism and national service also got inspiration through her songs”
▪︎ “Lata ji was like a melodious manifestation of ‘Ek Bharat Shreshth Bharat’”
▪︎ “Lata ji’s notes worked to unite the whole country. Globally too, she was India’s cultural ambassador”