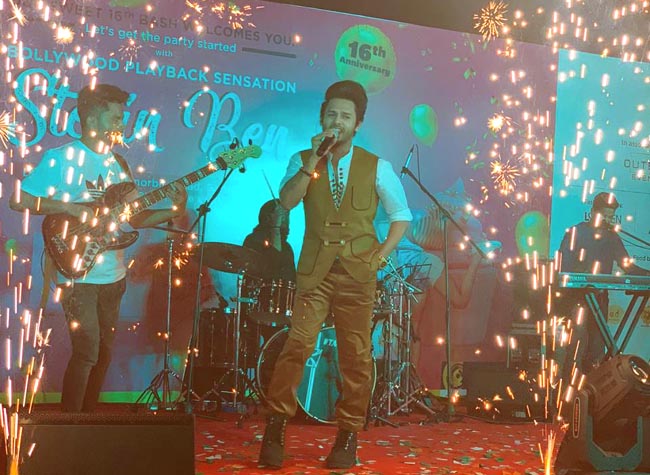 Mumbai, January 27th, 2020: An electrifying evening was what the people who visited Inorbit Mall, Malad on 26th January 2020 experienced. To celebrate it’s 16th anniversary along with the 70th Republic Day of India, Stebin Ben, the widely known and extremely talented singer and performer, put up a live show for his fans at Inorbit Mall, Malad. A wave of people were present to witness the glorious performance and have an alluring musical experience. Stebin Ben, who has given his voice for a number of films including Shimla Mirchi, Hotel Mumbai and various TV series, has a huge fan following and so the mall was packed with his fans excited to witness him. Stebin brought in the celebration by cutting the Anniversary cake and was seen interacting with his fans.

“16 years may be a short period of time in many industries, for malls in India, it is nearly as long as the history of malls. With few dozen brands opening their first retail store at Inorbit Malad in Jan 2004 and then being a launch pad for nearly 100 brands in India, Inorbit Malad has seen the evolution of organised retail in India. Today as we celebrate the 16th anniversary of the mall, we want to thank everyone for all the love & support.We look forward to plan another decade of awesome customer experience. Keep watching Inorbit Malad for new things coming up this year.” Said Naviin Ibhrampurkar, Head of Marketing and Corporate Communications, Inorbit Malls.

Since inception Inorbit has adapted to the changing trends and stayed relevant to customers. With an ideal mix of national and international brands, the mall is the perfect place to shop. Inorbit has always encouraged community bonding and offers memorable shopping experience. It is not just the shopping that draws the crowd to the mall. It is also the f&b and superior entertainment options that make the mall a social destination for all age groups.