Richard Gadze of Delhi Dynamos FC celebrates the goal during match 27 of the Indian Super League (ISL) season 3 between FC Goa and Delhi Dynamos FC held at the Fatorda Stadium in Goa, India on the 30th October 2016.
Photo by Faheem Hussain / ISL / SPORTZPICS

Delhi Dynamos FC secured their second win of Hero Indian Super League 2016 after a 2-0 triumph against FC Goa in front of almost 18,000 fans at the Jawaharlal Nehru Stadium in Fatorda on Sunday evening. Both the goals came in the second half, following the introduction of Marcelinho. The winger scored first in the 72nd minute before setting up Richard Gadze four minutes later for a comfortably victory against last season’s runners-up.

Goa came desperately close to taking the lead in the 5th minute after Rafael Coelho went in on goal, but Toni Doblas just managed to get his finger-tips on the Brazilian’s attempted chip, which was still heading towards goal until Anas Edathodika headed heroically off the line to concede a corner. Richard Gadze of Delhi Dynamos FC successfully attends for a goal during match 27 of the Indian Super League (ISL) season 3 between FC Goa and Delhi Dynamos FC held at the Fatorda Stadium in Goa, India on the 30th October 2016.
Photo by Faheem Hussain / ISL / SPORTZPICS

Julio Cesar was next to try his luck for Goa after a delightful pass by Coelho found him in a good position. He dragged his shot wide and failed to test Doblas this time around. Delhi had three quick attempts on goal soon after through Gadze. The Ghanaian’s first two shots were blocked by the Gaurs’ defence, while his third effort was safely collected by Subhasish Roy Chowdhury in goal.

Mandar Rao Dessai came closest to breaking the deadlock in 26th minute when a thunderous left-footed shot from distance nearly took the paint off the post. Gadze had another shot on goal three minutes later after Florent Malouda set him up. This time the 22-year-old missed the target to Delhi’s despair.

Delhi’s last chance of the half also fell to Gadze. The Ghanaian drove at the Gaurs’ defence before forcing Chowdhury into a save. Romeo Fernandes had Goa’s last shot of the half, which required Doblas’ intervention to keep it 0-0 at half-time.

It was a slow start to the second period with the first shot of the half coming in the 56th minute through Bruno Pelissari, whose effort from range was straight down Chowdhury’s throat. Cesar flicked on a Dessai cross from the left into a dangerous area two minutes later. A desperate stretch by Luciano Sobrosa wasn’t enough to meet the 36-year-old’s flick-on, however, as the ball trickled across the face of the six-yard box and went behind for a goal-kick.

Marcelinho came off the bench for Delhi shortly after the hour mark and made his presence felt immediately with two quick attempts. Sobrosa then had a cheeky effort on goal tipped over the bar by Doblas in the 66th minute.

The opening goal came six minutes later after some individual brilliance by Marcelinho. Delhi’s super-sub expertly controlled a long ball from Doblas before gliding past Goa’s defenders and unleashing a venomous shot into the back of the net to make it 1-0. 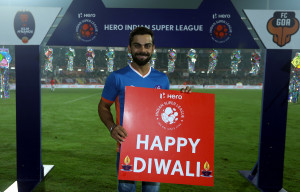 The Lions sealed the result in the 76th minute after Marcelinho headed a Malouda cross that found him at the far post towards Gadze, who was on the edge of the six-yard box. This time the Ghanaian striker made no mistake as he buried the ball into the bottom corner to give the Dynamos a two-goal cushion.

Delhi kept their shape and possession well in the final 10 minutes to run down the clock as Goa struggled to get on the goal. The Gaurs failed to create anything of note as Delhi picked up their second win of the season, against rock-bottom Goa.