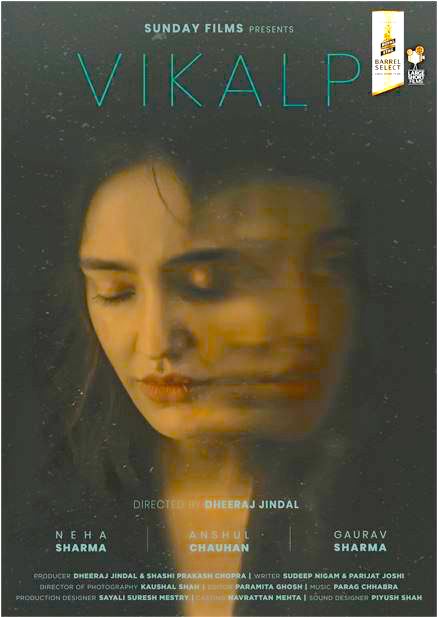 Producer and Director, Dheeraj Jindal showcases the story of a small-town girl who endures a traumatising experience at her workplace and now must take a pivotal decision that will seal her fate

New Delhi, August 26, 2021: Royal Stag Barrel Select Large Short Films presents ‘Vikalp’, directed by Dheeraj Jindal and starring critically acclaimed actors, Neha Sharma and Anshul Chauhan in the lead. The story revolves around the life of a small-town girl Shivani who decides to forge her own path in a metro city, after much deliberation with parents. However, an unexpected and traumatising incident at workplace turns her world upside-down. She must now make a crucial decision for herself, if she wants to seek redemption, go back to her conformist family, or to ignore the entire ordeal and live the life she built arduously for herself.

A gripping story touching upon the serious issue of workplace harassment, the director has effectively depicted the torment that Shivani (Neha Sharma) undergoes, weighing her aspirations and ambitions against her own justice. The poignant storytelling is further amplified as Shivani’s friend, played by Anshul Chauhan, walks her through her own past affliction and urges her to take the right step. The audience will be left at the edge of their seats as Shivani contemplates her own fate.

Talking about ‘Vikalp’, Neha Sharma says,” Women around the world are disproportionately impacted by gender-based harassment and assault in the workplace. This is becoming more and more common, and a lot of these incidents remain unreported. Most of these women face the same dilemma as Shivani did in the movie, whether to report the incident and go through a traumatic trial at the risk of losing one’s job or stay mum and continue life as usual. Women sometimes are forced to feel that their entire life’s work and aspirations are at stake, a price too steep for them to pay. This movie is the perfect representation of the massive scale of harassment in the workplace that sometimes remain under-reported because of fear of disbelief, blame, or social or professional retaliation. The decision in the end, for the woman, is never easy.”

Talking about the movie further, Director, Dheeraj Jindal added “While women are raising their voices about unwanted and unacceptable behaviour that creates yet another barrier to their success, I feel a lot more needs to be done and a lot more is still unsaid. It’s evident that such harassments often lead to depression. The story came from the experiences shared by my two friends who have gone through a similar situation, and I am sure it’s not just the two, but, there are many women out there who end up having to make such choices, and no matter what they choose, they are at the losing end. With this film, I have tried to convey that it’s not a woman’s fault if she lands up in such a situation where she has to choose between something where she is only losing. This is my 2nd film as a director with Royal Stag Barrel Select Large Short Films and I feel that such platforms are needed where directors can showcase their creativity”

The movie will be first exclusively premiered on Royal Stag Barrel Select’s Large Short Films channel on Youtube – https://www.youtube.com/user/LargeShortFilms/videos, a platform to watch the most original and inspiring short films made by some of the finest directors in India.

Royal Stag Barrel Select Large Short Films has released some of the most prodigious award-winning short films with renowned artists and directors from the industry which truly reflects originality, imagination and perfection.  Ahalya, Interior Café – Night, Ouch, Chutney, Anukul, Mumbai Varanasi Express, Khool Aali Chithi, The School Bag, Bruno and Juliet, ‘Shunyata’, Juice, Maa, Chhuri, Her First Time and Iktarfa are some of the phenomenal films that have been released on this platform. Royal Stag Barrel Select Large Short Films as a platform for original short films has been the pioneer in popularizing this genre of filmmaking.

This #Paralympics, show your support and #Praise4Para with these features on Twitter