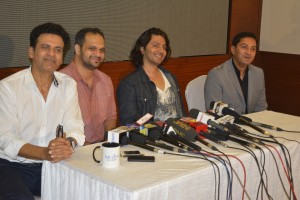 1st July, 2016, Mumbai: Muvizz.com, the producers of ‘Kriti’ along with Manoj Bajpayee and director Shirish Kunder called for a press conference with regards to the ongoing issue surrounding the short-film. According to the makers of ‘Kriti’, false allegations were made by the Nepali director. ‘Kriti’ makers recently discovered how anyone can backdate videos on vimeo, an online video streaming channel. Through a live demonstration they addressed the media about the same, putting an end to the claims of ‘BOB’ makers that it was a private video shared in October, 2015.

Attorney Rizwan Siddiqui, Shirish Kunder’s lawyer, also present at the conference explained the sequence of events because of which the entire dispute arised. He made clear his client’s innocence by putting forth some valid facts. Manoj Bajpayee the lead actor of the short-film not only extended his support to the director but also stated that they discussed about the film a year back. ‘Kriti’ was shot in February this year while the film ‘BOB’ was released on Youtube in the month of May. According to Mr. Rizwan Siddiqui, the Nepali film-maker has not responded to the legal notice sent to him nor has he put forth any explanation. Abhayanand Singh, Founder of muvizz.com demonstrated how old videos on vimeo can be replaced with new ones while retaining the previous dates when they were published. In order to establish their claims he replaced an old video on vimeo dated a year ago with the short film Kriti. Thus the year old video got replaced with Kriti which originally was released on 22nd June, 2016. The maker’s of ‘Kriti’ made a sincere appeal to the media to believe the facts and not such frivolous allegations. Also, they requested to not give unwanted attention to petty self-serving diversionary tactics.

Related Topics:BOBKritiRizwan Siddiqui
Up Next