The birthday bash of Avinash Wadhawan & his little son Samraat, who turned five years old, was a grand affair. It was a flamboyantly splendid party with glitz, glamour, opulence and loads of love for the birthday boys reflecting from the entire preparations that will be no less than perfect. 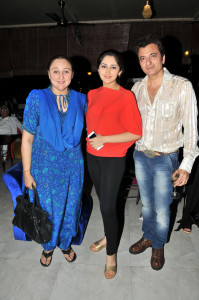 The food was a sumptuous layout of the best that can be imagined. It was a magical feast with the most delicious fare laid down in the most luscious manner. The party was a gourmet lover’s delight with a lovely blend of exotic cuisines; it had the best from across the land.

The birthday boy Avinash Wadhawan who is super excited about sharing his B’day with his son Samraat, said, “Birthdays are always special. The day becomes further special when you spend the day with your friends and family”. His beautiful wife Natasha said that Avinash’s biggest Birthday gift was when Samraat was born on his B’day 5 years ago.