On the occasion of World Youth Skills Day 2022, Wadhwani Foundation calls for empowering the youth with ‘Skills for the Future’ 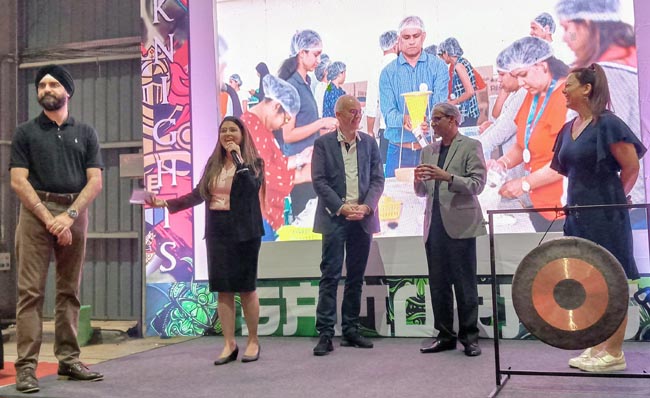 Mumbai, December 6, 2019: HERE Technologies, the global leader in mapping and location platform services, partnered with Rise Against Hunger India to pack 3,00,000 meals today, for the undernourished and less fortunate.  As part of its global #Give Back value of benefitting communities, @ 2000 HERE employees came together at Nesco Exhibition Centre, Goregaon to create one of the largest meal packaging events in India. This also marked the one millionth meal to have been packaged in two years by HERE Technologies and Rise Against Hunger in seven countries including France, Germany and the U.S.

The partnership HERE has developed with Rise Against Hunger India has also led to the development of a hunger map and tracking system that will enhance the organization’s evaluation process and monitoring of meal distribution to its partners. Part of the company’s Social Innovation efforts, the project was launched mid of 2019 and results will be launched in the new year.

Commenting on the initiative, Mr. Damandeep Kochhar, VP – Global Content Operations, HERE Technologies said, “As per UNICEF’s The State of the World’s Children 2019 report, malnutrition caused 69 per cent of deaths of children below the age of five in India. The unavailability of quality nutrition is one of the biggest life threats to a major chunk of India’s population. Rise Against Hunger is known for its continual commitment to eliminate hunger and they have taken commendable steps in providing wholesome meals to people in need. This year, not only did we pack 3,00,000 meal packets within two hours, but we also achieved another key milestone – packing the millionth packet globally. As always, this partnership gave HERE employees an opportunity to come together, collaborate on a massive scale and redress a major socio-economic issue of India. In the days to come, the meal packets will be distributed to multiple beneficiaries across Maharashtra including children, HIV-positive individuals, women, patients of tuberculosis, and the elderly.”

Undernutrition is one of the key issues plaguing India today. In a country where 60% of the population earns less than $3 a day, it is not surprising that according to Food and Agriculture Organization, around

195 million people go hungry daily in India with 1 in 4 children being malnourished. As part of its CSR tenet, HERE Technologies strongly believes in giving back to the society and providing less fortunate communities with necessary resources and welfare measures to help them grow and flourish.

Dola Mohapatra, Executive Director, Rise Against Hunger India said, “In the last two decades of our existence, Rise Against Hunger has stayed true to its commitment of alleviating global hunger. We are thankful to HERE Technologies and all the 1500 employees who came together to extend their support to this endeavor and for making this event a huge success. The enthusiasm of the HERE employees to put together 3 lakh meals was heartwarming and I’m grateful to each one of them. With partners like HERE, every year we come even closer to our vision of eradicating hunger by 2030.”