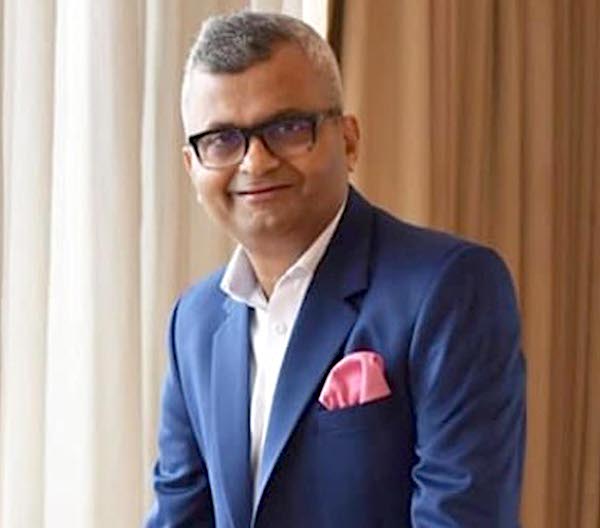 Mumbai, 3rd September 2022:  In a candid conversation, our editor in chief Mr. Riyaz Ahmed speaks with Dr. Aneel Kashi Murarka – A Common Man with Uncommon Dreams who is always focusing on making the world a better place to live in. Dr. Aneel Kashi Murarka, an Industrialist, Philanthropist, Thinker & Humanitarian who believes in giving back to society. He has dedicated his life to social welfare, upliftment, and developmental activities for fellow beings. His simplicity, determination, and commitment towards empowering the ‘Common man’ made him a mega-influencer of youth. TIMES GROUP BOOKS has launched the book “Uncommon Dreams of A Common Man “on 7 October 2020.

Dr Murarka has thousands of achievements during a research done by MTI News in their effort to motivate such people, MTI News have honoured him the “MTI Excellence Award 2021 – 2022” in the field of social welfare, upliftment, and developmental activities, to boost his morale and encourage others to do the same.

At just 16 years of age, Dr. Aneel Murarka was inducted into his family business to oversee the functioning of the entire process of manufacture of specialty chemicals for the textile sector. Aneel was passionate about learning the ropes of the business, while other youngsters were enjoying life with the pocket money from parents, Aneel’s father Mr. Kashi Murarka encouraged him to understand the family business and take it to the next level. And Aneel did just that. Dr. Murarka was born on 7th May 1967 to Kashi Prasad and Meena Murarka. He lived with his parents along with wife Sangeeta and son Sidhant in Mumbai. His grandfather was a freedom fighter who participated in the Indian Independence Movement.

Aneel went into the details of the business and tried to use innovative techniques to increase efficiency in every department, he believed that to progress in life we need to take care of the entire ecosystem, starting from family which includes all employees and the customers and finally all human beings and the environment.

After completing his commerce from Mithibai College, he officially joined his father at MiraChem Industries and Under his leadership, the company scaled new heights, from a medium enterprise it became a corporate entity. His innovative mind led to deployment of eco-friendly chemicals for the textile industry, thus encouraging sustainable practices. He was conferred upon an honorary doctorate by the international Tamil University, USA, in 2015.

The Bharat Prerna Awards honours those who have risen above their condition, whether it be a physical disability, a mental illness or sensory deprivation, and shown extraordinary feats of courage.

The Shoorveer Awards is a unique initiative that honours common men and women who have done “uncommon” things. It honours lion hearted individuals i.e. people who have known no fear and pursued extraordinary acts of bravery often at the expense of their lives.

Awards Zindagi Ke honours the supreme valour, courage and dedication of the unsung heroes who have selflessly devoted and sacrificed their lives for our country. Salutations to the brave martyrs and true heroes of the Indian Armed Forces, Coast Guard, Police and Fire Department!

In 2016 Aneel has also produced various short films on social causes starring Bollywood actors. The two most popular films are #DontLetHerGo featuring Amitabh Bachchan and Kangana Ranaut which focuses on the importance of cleanliness, and #11Minutes featuring Sunny Leone which talks about the harmful effects of smoking. Soon he collaborated with like-minded filmmakers to make quality films with social messages. He is awarded with legend Dadasaheb Phalke Award 2021 for his contribution for his short films.

Aneek Murarka’s father Mr Kashi Murarka has been spearheading an array of social and humanitarian initiatives PAN India. And with his son Aneel, he founded Ample Mission, an organization that specializes in Intellectual Property-based events and organizes awards programs.

Ample Mission organizes award ceremonies to recognise brave hearts who have made a difference in the society through their work and actions. Ample Mission esteemed awardees may be common men and women who have exhibited extraordinary acts of courage and bravery, policemen, firefighters, army personnel and specially-abled individuals who have achieved profound success in their respective fields.

He has also engaged in several charitable activities influencing education, healthcare, and improving living conditions. He is officially appointed as the Ambassador of the Swachh Bharat Abhiyaan, an initiative to clean the infrastructure of small communities in India. He is actively involved in supporting NGOs, including the Indian Development Foundation, Narayani Dham (SAMRPAN), NASEOH, and Rajasthani Mandal. He also produced an anti-smoking film, 11minutes.

Aneel Murarka has thousands of achievements like this and during a research done by MTI News in their effort to motivate such people, MTI News gave him the “MTI Excellence Award 2021 – 2022” in the field of social welfare, upliftment, and developmental activities, to boost his morale and encourage others to do the same. 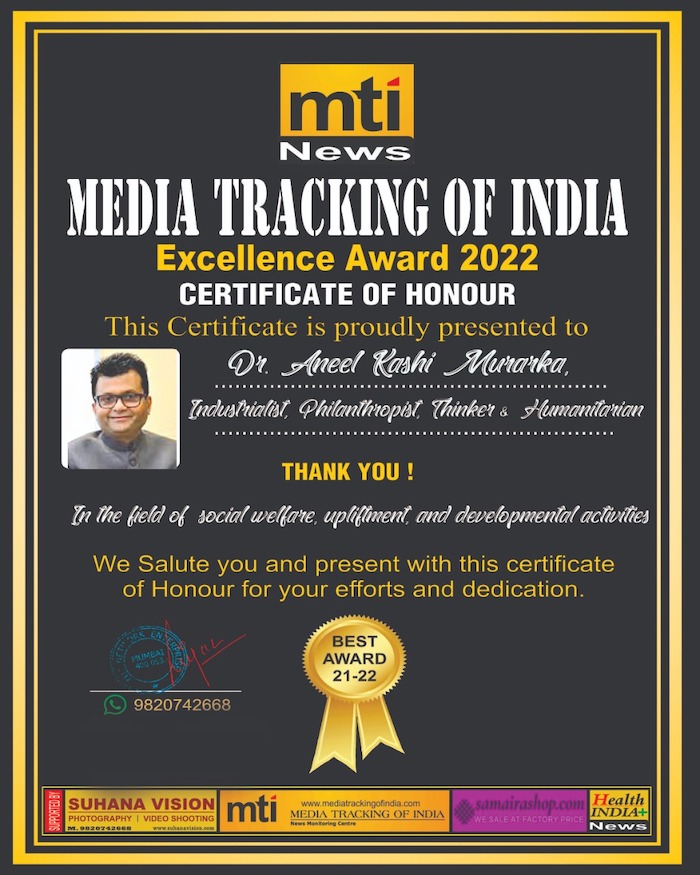 He was honoured by former president of India Dr. APJ Abdul Kalam  for his youth and education related initiatives at an event held in Guru Nanak College, Mumbai.

Honoured with “MAKE IN INDIA AWARD” by BHARAT NIRMAN Foundation

ET Business Icon (West) 2020 for exemplary contribution towards the society as an Iconic Social Philanthropist.

Times “Inspiration Entrepreneur ” Award 2020 for Excellence in ” Service of Mankind “.

He has been awarded an honorary doctorate for his extensive work for philanthropic causes.

MTI Excellence Award 2021 – 2022” in the field of social welfare, upliftment, and developmental activities