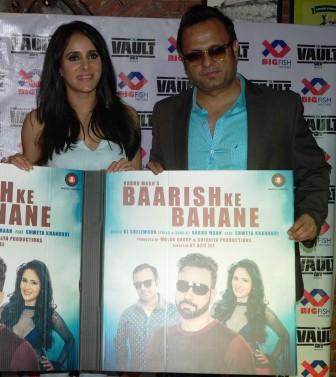 DJ Sheizwood who has constantly churned out tracks in the past which have been instant chartbusters says he is elated & overwhelmed by the fantastic and huge warm response the song has received not just in India but globally too. DJ Sheizwood, the only Producer, Music Director who has worked with actors like Mika Singh, Daler Mehndi  & many more. Having carved his name Internationally with decorations like the 18th Journalist award for his outstanding contribution to Pop Music, NBC Music Award & Maharashtra Journalist Award for contribution to Folk Music says “The track conveys a beautiful story. Rain songs usual capture the essence of passion which has been a favorite of people. Though music is a very personal choice, we are sure the love for rains songs is universal”

Shweta Khanduri has walked the ramp as a showstopper for some of the top designers of the country like India Runway Week season 7 for Designer Forum Rambhia, IIJW Gitanjali for Designer Shaini NC Show – Beti Foundation,  Enchante 2016 . Shweta has done exclusive photoshoot with renowned celebrity photographer Daboo Ratnani for Anurag Makeup Mantra and costumes designed by Avesh Dadlani. She also featured in 2017 I AM FIT calendar says “ I am in love with the song, how it turned out. Working with legends like Babbu Maan & Dj Sheizwood was such an honor. If I think of a monsoon song which I can listen day in & day out, it has to be Baarish Ke Bahane”

Baarish Ke Bahane” which is the first hindi music single of Babbu Maan is filled with so much positivity that it instantly dispels the gloominess of a bleak, rainy day. The sublimely beautiful song, combined with beauty about monsoon, provides the perfect backdrop for the singer and the music director to weave their magic. The song will help you explore this enchanting world of thoughts and emotions. The song is touted to go down the history, in terms of choreography, singing, music and acting—and a trendsetter of sorts for the many other songs that equate rain with rendezvous?

SURPRISE! MANIK SONI, Owner of Charisma Spa & SIDDHARTH SHARMA threw a surprise birthday bash for Gautam Sharma, Entrepreneur at one of the plush lounges in the suburbs.