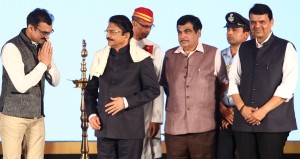 In a Star Studded Event “Swabhimani Mumbaikars” held recently in a 5 Star hotel in Mumbai to announce this First time ever an Festival which Mumbai proudly call its own and Chief Minister Devendra Fadnavis announced that he would love this Festival to attract International community so that we showcase Mumbai as a city where people from different religion, caste and colour stay together happily.

Honorable Chief Minister announced his full support by the Government and especially from the Tourism Ministry to make this four day event an international success. The organisers envisage that this annual occasion will establish itself as a landmark event and go a long way in bringing back Mumbai’s glory as one India’s top cities.

The four-day festival, to be organised between December 15th and 18th this year, seeks to re-affirm Mumbai’s cultural stronghold and influence not just in the country but among the international community as well. Much like the way the 7 islands come together to make this city, the Mumbaikar Festival as a platform brings together citizens and various stakeholders of Mumbai to nourish, cherish and relish Mumbai: the home to every Mumbaikar.

First look of Battle of Saragarhi out