​ FC Goa steal a point against ATK in fiery encounter Joffre Gonzalez of FC Goa takes a penalty during match 15 of the Indian Super League (ISL) season 3 between Atletico de Kolkata and FC Goa held at the Rabindra Sarobar Stadium in Kolkata, India on the 16th October 2016.
Photo by Shaun Roy / ISL/ SPORTZPICS

KOLKATA: Atletico de Kolkata maintained their unbeaten record against FC Goa in the Hero Indian Super League but were forced to settle for a point in a fiery 1-1 draw at Rabindra Sarobar Stadium, Kolkata, on Sunday.

Sameehg Doutie scored a gem of a goal in the sixth minute from a volley to put Atletico de Kolkata ahead but the match then had several twists and turns before Joffre Gonzalez converted a penalty in the 77th minute to give FC Goa a point after both teams were reduced to 10 men.

At first, Atletico de Kolkata saw Stephen Pearson being issued the marching orders for a foul on Trindade Goncalves in the 53rd minute but any advantage that FC Goa would have had was negated after Sanjay Balmuchu was sent off nine minutes later for a second bookable offence.

The draw left Atletico de Kolkata with six points from four matches, which includes three draws, while FC Goa got their first point from four matches and continue to be placed at the bottom of the league table. 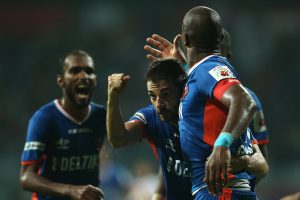 Joffre Gonzalez of FC Goa celebrates after scoring the penalty during match 15 of the Indian Super League (ISL) season 3 between Atletico de Kolkata and FC Goa held at the Rabindra Sarobar Stadium in Kolkata, India on the 16th October 2016.
Photo by Shaun Roy / ISL/ SPORTZPICS

With three consecutive losses it was no surprise that FC Goa chief coach Zico decided to ring in the changes. There were five changes for the visitors as Zico preferred to hand starts to the likes of Subashish Roy Choudhury, Gregory Arnolin, Keenan Almeida and Robin Singh, all making their debuts in this edition of the ISL.

Atletico de Kolkata also made three changes with Stephen Pearson, Abinash Ruidas and Henrique Sereno handed starts for the first time. The momentum was with FC Goa at the start but it were the hosts who stunned FC Goa with a brilliant goal.

FC Goa would have been wondering why they conceded the free kick in the first place. Raju Gaekwad needlessly brought down Doutie. Javi Lara stepped forward to take the free kick and curled the ball into the goalmouth where Raju headed it just outside the box but the danger was not cleared: Doutie who was well-positioned struck his volley perfectly and beat Choudhury under the Goa bar.

FC Goa regained their composure and started to launch a wave of attacks. Rafael Coelho’s cross was disappointing as Joffre had made a fine run and was all alone inside the box in the 13th minute. Three minutes later, Trindade was played through by Joffre but ATK defender Arnab Mondal cleared the danger.

The match took a dramatic twist in the 53rd minute when Pearson was sent off. Zico made quick changes bringing in Romeo Fernandes and Mandar Rao Desai but the advantage was negated as Goa midfielder Balmuchu was sent off nine minutes later.

The visitors were lucky to escape with a point after scoring the equaliser from the spot in the 77th minute. Goa won the penalty as Borja Fernandez handled the ball from a Joffre corner-kick and Joffre himself completed the formalities from the spot.

Atletico de Kolkata could have walked away with full points but Goa goalkeeper Choudhury came up with two good saves to deny Lara, from a free-kick, and Iain Hume.​

Related Topics:​ FC Goa steal a point against ATK in fiery encounterATKRomeo Fernandes and Mandar Rao Desai
Up Next

To mark the festivities in the country, FC Goa and Delhi Dynamos FC players and respective Head Coaches celebrated Diwali ahead of their match in Goa today.