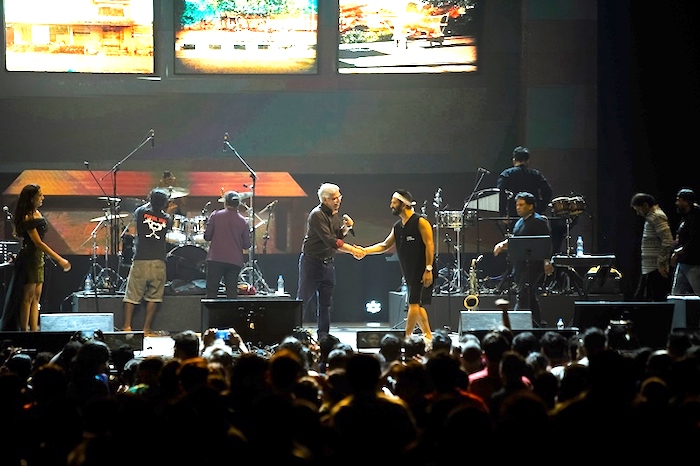 5th January 2023: For the last eight days, the city of Panaji lit up with the arts from across the South Asian region and the globe, with strains of music floating in the air, and discerning audiences watching experimental theatre, revisiting rare archives that showcase our cultural heritage, through books and paintings, celebrating artists, and revelling in the immersive experience of the fifth physical edition of the Serendipity Art Festival.

Organised for nine days and spread across 14+ venues with over 170+ programs, and more than 1000 artists, the Serendipity Art Festival was held in association with GMR and supported by the Government of Goa, the Corporation of The City of Panaji, the Directorate of Art and Culture, Goa, the Entertainment Society of Goa, the Goa Tourism Department, and the Goa Forest Department, along with Technology partner Microsoft and Logistics Partner Delhivery.

The programming for this edition was spread across Exhibitions, Performances, Workshops, Public Arts, Children’s programming, Talks & Book launches, and much more.

The Exhibition segment was curated by Sudarshan Shetty, Veerangana Solanki, Anjana Somany, Pramod Kumar KG, with special projects like Somewhere Ethereal by Mathieu Wothke and Terra Nullius: Excavations from Image 3.0 by Pascal Beausse and Rahaab Allana, along with Goa Familia by Lina Vincent and Akshay Mahajan.  The festival also had other exciting special projects like 4×4: Four Galleries, Four Voices, represented by four galleries in Delhi (Shrine Empire and GallerySKE), Kolkata (Experimenter), and Mumbai (TARQ), showcasing current artistic practices from across the region.  Some other exciting projects include a special archival exhibition of Orientalist Archives: Indo-British Painting in Colonial India (Company School Painting from the Swaraj Archive), by Dr. Jyotindra Jain and Jutta Jain-Neubauer.

The performance segment was curated by Bickram Ghosh and Ehsaan Noorani, who brought music from the far corners of the country and the world that experimented with its forms causing powerful fusion performances and Quasar Thakore Padamsee, brought to the fore experimental theatre combining the classics and the postmodern screen plays along with children’s theatre in collaboration with Ranga Shankara’s “AHA! “Theatre for Children. While Geeta Chandran and Mayuri Upadhya, curated a wide set of project that had re-adaptations of Indian classics, contemporary themes and cultures.

The Serendipity Arts Festival continued being a catalyst for cross-cultural exchange, fostering a sense of collaboration and exploring inter-disciplinarity in art forms whilst also erasing regional divisions in the country. Offering equal opportunities to artists, artisans, indigenous and folk-art forms, performers and other creative practitioners from all over India and the South Asian region, the event aimed to foster the development of thriving artistic communities across India by making the arts inclusive, educational and accessible.

Accessibility and inclusion have been the driving force of the initiative by the Serendipity Arts. The festival being back post pandemic, brought productions conceptualized during the pandemic with deep insight on fusing the digital and the physical. Along with that the Festival ensured that art can be experienced and accessed by all, with the Senses programming, the festival has been able to reach out to a wide set of audiences that have not been part of the mainstream. It included workshops that are designed in a way that regardless of their disabilities, people can equally participate and engage in various creative activities, that provide relief and ensures mental well-being, through the joy of creation. The festival had guided tours, braille maquettes, ramps and sign language interpreters that have been a constant with the festival.

The Goan public and culture enthusiasts visiting the city from across the world were treated to an impressive array of programming including ground-breaking films, digital art exhibitions from across the globe and craft installations, that use space making to revive its practice and appeal, music performances from all corners of the country, experimental theatre, engaging panel discussions, diverse culinary workshops and dance performances that were a coming together of the traditional and the contemporary.

In addition to the thirteen other venues for all art forms the main performance space The Arena at Nagalli Hills, saw a large number of people coming in from across Goa, the country, and the world to experience the many seminal acts. The closing event started with Mr. Sunil Kant Munjal, congratulating the curators and artist for the bigger than before fifth physical edition. He took time to thank the group of 300 plus dedicated volunteers who came from across educational institutions of Goa and from across the country. Speaking about the fifth physical edition of the Serendipity Arts Festival Mr. Sunil Kant Munjal, Founder & Patron of Serendipity Arts and the Founder of THE BRIJ, said, “The Festival in its fifth physical edition has superseded our expectations and we are really happy to see the support we have received from our curators, the creative community, the authorities, and the people of Goa. We are glad that we could come back with an interdisciplinary festival like Serendipity that supports and creates opportunities and avenues for the arts and the artists of the entire region of South Asia and the world, through collaborations and exchanges.” Adding further about a permanent residence for the creative expressions of the region, Mr. Munjal said, “We are also happy to announce that the arts and culture of our region will have a permanent home with the THE BRIJ, which will retain the aura of the flagship festival while adding multiple layers of practice, learning and experimentation to its programs, around the year. Planned around diverse creative practices, the facility will have arts education, incubation labs, centres of cultural innovation, performance spaces, and museums at a never-before-seen scale, in an interdisciplinary manner. In effect it will be the complete ecosystem for Arts & Culture at one place.”

A grand visual representation of the upcoming arts and culture centre was showed on the giant screens at the Nagalli Hills Grounds, through a captivating film that captured the imagination all attending, with loud applauses shuddering the venue, as it was widely welcomed by the creative community and the general audience alike.

Speaking about the Festival and its fifth edition, Ms. Smriti Rajgarhia, Director, Serendipity Arts Foundation and Festival, said, “We are very happy to see the warm reactions from the people who visited and supported us for this fifth physical edition. We are delighted to see and hear about the impact the festival has in people’s lives and we are glad to have been an enabler in spreading the magic of the arts” Adding further she said, “The festival would not have received its shape and form without the support of our curators, the artists and the contributions by the teams and our patrons, with whose support each year we are edging towards making Panjim the cultural hub of the world.  We are closing the curtains on this edition, with the work on the next edition underway in its wings, as we look forward to being back with our next edition, celebrating the arts and creative expressions from across the world and South Asia.”

Speaking about the association Ms. Shweta Jain, Chief Business Development Officer: Luxury, Reserve & Craft – India & South Asia at Diageo said, “It is exciting to partner with the Serendipity Arts Festival to celebration artistic expression and bold choices. We have always been about inspiring creativity and our ethos of “Keep Walking” provides the perfect canvas to do just that”

Speaking about the association as a Logistics partner to the Festival, Rohan Shanbhag, SVP – Sales & Marketing, Delhivery, said, “Serendipity Arts Festival brings a 9-day extravaganza to Goa featuring craft, music, dance, theatre, visual and culinary arts embodying the vision of 15 eminent curators. The festival not only promotes creativity but also saves heritage art forms. We are delighted to be the logistics partner for Serendipity Arts Festival 2022″

Highlights of the Day included Swallow, Curated by Quasar Thakore Padamsee with Arghya Lahiri directing and designing the light of the production, and produced by G5A Forum and Blackboxers Productions – An Amateur production by Arrangement with Nick Hern Books; this was an experimental theatre where three strangers face their demons head-on. Their lives collide, and they might be able to save one another. The audience loved the suspense and histrionics of the play. In Jo Dooba So Paar, presented at The Theatre in the Old GMC complex, the play dealt with the story of Ameer Khusrau and Hazrat Nizamuddin Auliya through anecdotes and tales woven in a Daastaan, accompanied by live Qawwali singing. The Arena at Nagalli Hills Ground reverberated with Trance Effect – a Spotlight Indie & Folk Music Showcase, curated by Ehsaan Noorani, featuring the eponymous independent pop-rock band from Dimapur. The audience was left spellbound after watching The Money Opera; an immersive theatre production created as a site-specific project commissioned by Serendipity Arts Foundation. The show was conceptualised and directed by Amitesh Grover and housed in a 5-story abandoned building; it contained songs and stories of ambition, guilt, fear, desire, love, community, and many others that reveal the nature of contemporary society—what it keeps hidden, oppressed, and buried. On the final day, the sunset cruise, River Raag, curated by Bickram Ghosh, featured Shaoni Mojumdar singing Thumri, accompanied by Raya Korgaonkar in Harmonium and Abir Mukherjee in Tabla. There were many footfalls for the Silent Art Workshop: Just Do Nothing! an unprecedented workshop that encouraged participants to do nothing and sit in stillness. It was a fascinating experiment that taught us how to let silence surge softly around us while we introspect. The Serendipity Arts Festival Finale featuring Amit Trivedi had the audience swaying and singing his hits like Fitoor, Sham Hai koi, Zinda from the Lootera and all the other incredible numbers, along with the stupendous singer-songwriter his co-singers and band. A befitting grand finale!

It is now, a wait of 365 days to witness the glorious Serendipity Art Festival in its 6th Edition.

The official hashtag for the festival is #MeetMeAtSerendipity.

For regular updates, look for: