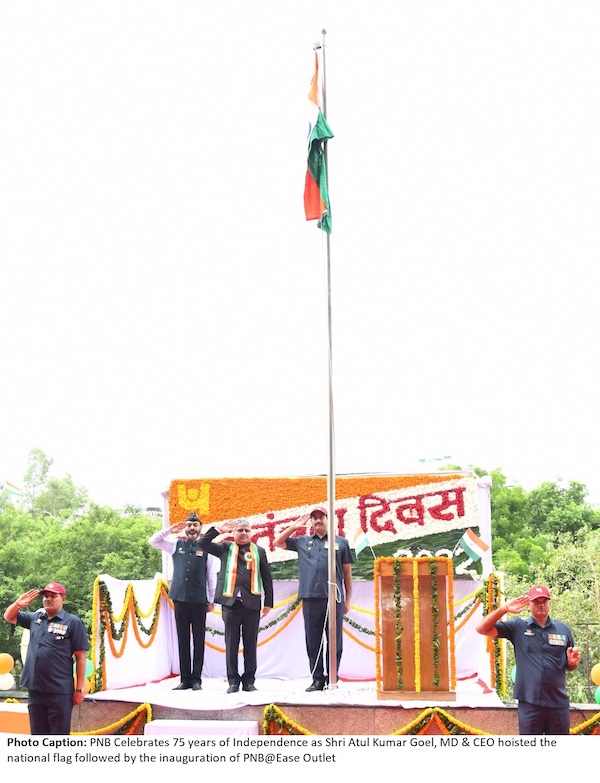 The announcement of this facility was first made during the Independence Day celebrations at the bank’s headquarters in Dwarka followed by the inauguration ceremony of the Ease Outlet at Botanical Gardens, Noida. The Inauguration ceremony was graced and addressed by Chief Guest, Dr.  Mahesh Sharma, Member of Lok Sabha and public official, and Shri Atul Kumar Goel, MD & CEO of PNB.

Inaugurating the event, Dr. Mahesh Sharma said, “I congratulate and thank PNB for introducing this EASE Outlet facility, where all banking services can be availed under one huroof. It is a step towards the government’s vision of Digital India. It is a pleasure to be a part of this event and I wish more growth and success to the bank and its officials.”

On the occasion, Shri Atul Kumar Goel, MD & CEO of PNB said, “Today as we celebrate 75 years of our freedom, it is a matter of pride to be representing a truly Swadeshi Bank, founded by the freedom fighter who played a pivotal role during the independence movement, Shri Lala Lajpat Rai. I also extend my sincere regards to all the martyrs who fought for our independence back then and respect to the brave soldiers who continue to protect the nation ever since.”

Speaking at the inauguration of the Ease outlet, he further added, “With that, we are happy to inaugurate [email protected] outlet offering Walk Through Banking under which every transaction undertaken by a branch will be initiated as well as authorized by the customers themselves. Here, the customers can avail of multiple digital services including, Payment of Utility Bills, Transfer of Funds, ATM Services, Instant Account Opening, Video KYC, and much more enabling increased digital adoption.”

During the Independence day celebration at Dwarka, MD & CEO along with EDs and CVO paid tribute to Shri Lala Lajpat Rai –  freedom fighter and founder of PNB –  by garlanding his bust. This was followed by Shri Sanjay Kumar, Executive Director of PNB, administering the national Pledge to the participants and the rest of the PNB Parivar. The Bank also honoured it’s esteemed customers across the country in big numbers.

Under its CSR initiative, the bank also extended support for infrastructural upgradation at three government schools in Delhi which provides education to approximately 3000+ students.

Now, Paytm users can check live location and platform number of trains from the app