Born with a natural flair for singing, Sabiha Khan was formally initiated into the world of music at the tender age of twelve by her renowned Guru, Suresh Wadkar. An intelligent listener and a keen learner, Sabiha has devoted more than thirty years to the learning and practice of Indian semi-classical vocals. Her musical career spans over three decades resulting in national and international fame and respect.

Singer Sabiha’s soulful voice and multi-octave range made her famous performers in Indian classical music., A young girl at her school engrossed in daily life once got a golden opportunity to work on the most popular platform Doordarshan and to playa a wonderful cameo as a child artist in the most renowned show of that era Hum Panchi Ek Dal ke .With the dreams of fame and the spirit of becoming a part of Bollywood she wanted to make her career in acting.

But Destiny had some different plans for her and soon she got an opportunity to meet the legendary singer Suresh Wadkar through Dilawar Khan (her fufa) when she was just twelve years old. When Suresh Wadkar heard her, he told Dilawar Khan that she has an amazing potential of music and even agreed to teach her the various aspects of music and hone her skills. And then there was no looking back. Her versatility came to the fore when she was still in college, bagging gold medals in Western, Folk, Semi-classical vocals and Ghazals at the University Nationals for Mumbai University. She went on to display the same kind of seamlessness in her work when she started performing professionally. Right from playback singing to lending her voice for backup vocals in films, album tracks, television commercials and documentaries, to performing on stage and taking workshops, she has proved her effortlessness to adapt and deliver on a wide range of platforms. Singer Sabiha Khan has worked with renowned musicians like Ustad Sultan Khan, Salim Suleiman, Clinton Cerejo, Shantanu Moitra, Jeet, Pritam, Karsh Kale, Yotam Agam, Anoushka Shankar, Johnny Kalsi, Daniel, Vinayak Netke, Vivek Rajagopalan, Rajeev Raja and Sameeruddin. Another very enriching experience was her one-year stint in New York where she was sent by her Guru, Suresh Wadkar, to set up a school of Indian music. During her tenure there, she also co-designed and conducted Sound and Space workshops that drew great response from children, adults and senior citizens alike. Sabiha was signed on as a vocalist on Earth Sync’s Laya project, which was a musical tribute to the survivors of the 2004 Asian tsunami. She attended the Woodstock Festival and Ethno Festival in Australia with them, where she gave stage performances and conducted workshops with musicians from across the world. In 2012, she participated in Etno Histeria, the annual music festival of Slovenia, where she collaborated with Slovenian musicians and formed her own Indo-Balkan fusion band called Zamee.

Zamee is now going strong and has released its first album. Their songs are a mix of two distinct musical cultures that blend mystical Sufi poetry and sacred invocations with melancholic Macedonian love songs, and traditional Indian folk songs with Gypsy folk tunes. In 2016, they performed at Godi Bodi Festival in Slovenia followed by a tour in India which included a performance at Sehar Music Festival in Jaipur as a run-up to the World Music Festival which is hosted by the city every year. Sabiha is the lead vocalist of Aritmija, a Slovenia-based band with whom she has performed at renowned festivals like Fimu in France, Sobosko Poletje, Poletna Scena, Festival Jeff, Festival Akusticne Glasbe, Festival Zmaj ‘ma mlade and Noci v Stari in Slovenia and Gomad Festival, India. She also spearheads Zariya, a world music band made up of Indian musicians, which made its debut in 2017 on the World International Dance Day to packed audiences in Mumbai. 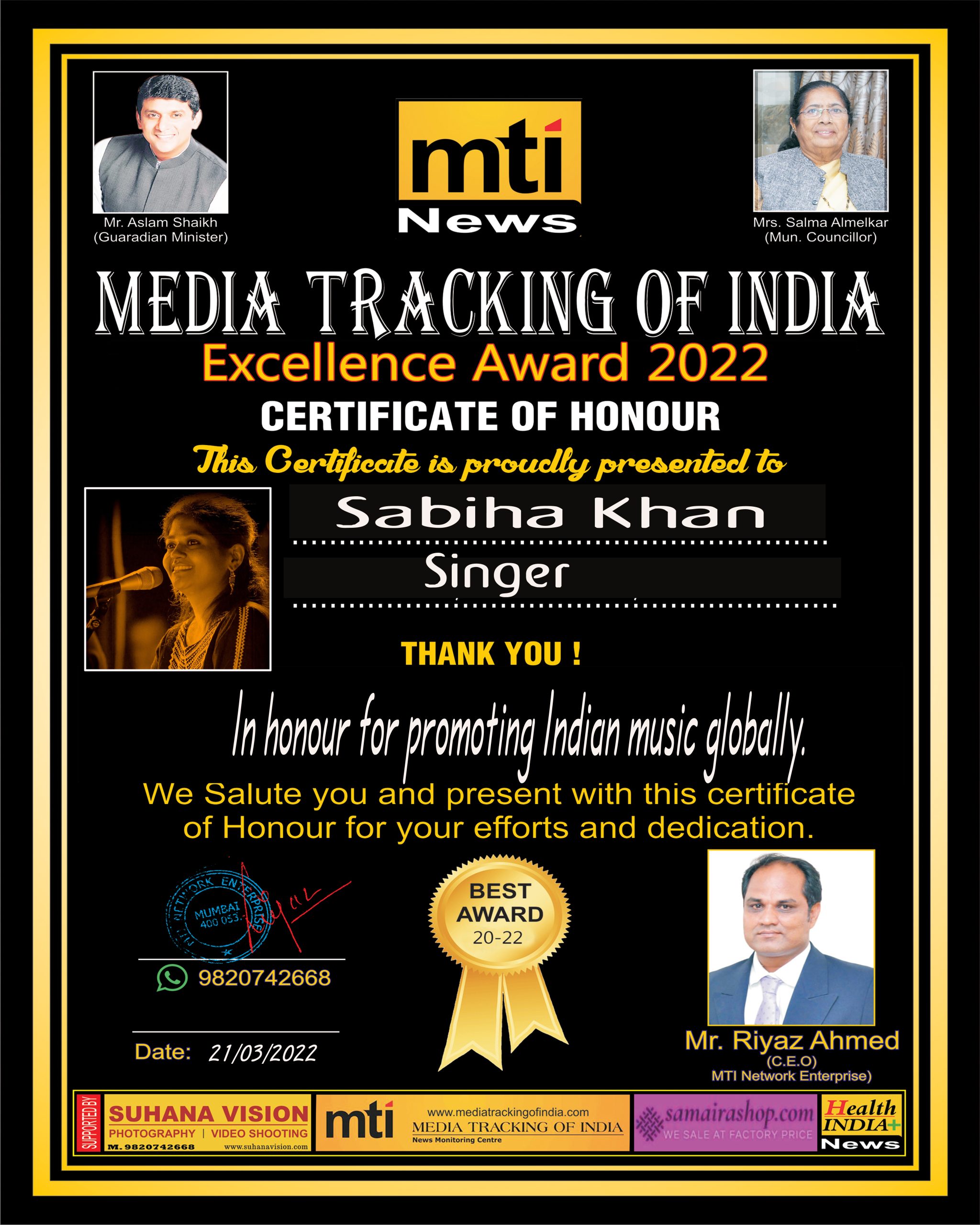 Her legacy includes memorable performances of classical and semi-classical vocal music, classical and devotional music She has many albums and film soundtracks and is known for innovations in various genres. Singer Sabiha believes in sharing her knowledge and enlightening others with her talent and leave a legacy behind her. She is teaching music to amateur and professional students.

So this year Media Tracking Of India’s Jury is pleased to honour the renowned playback singer Sabiha Khan with MTI excellence awards 2022 as MTI wanted Sabiha Khan to continue her musical journey around the world and make India Proud.