Airbus to recruit engineering, IT talent at Aero India 2023 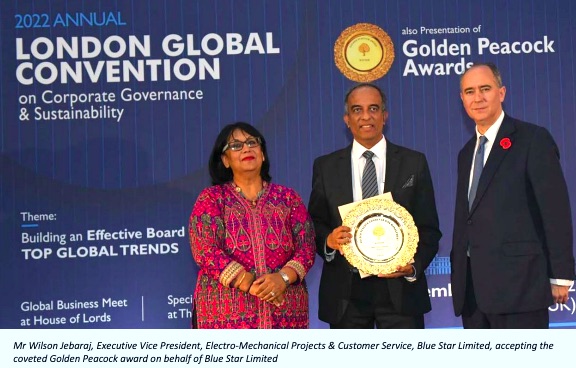 Air conditioning and commercial refrigeration major, Blue Star Limited, today announced that the Company has been declared the winner of the coveted ‘Golden Peacock Award for Risk Management’* for the year 2022. The Company has now won this award for the second time, the first time being in 2020.

The Company was bestowed with this award at a ceremony held in London which was attended  by  business  leaders  and   eminent   dignitaries  from  across  the  globe.   Mr Wilson Jebaraj, Executive Vice President, Electro-Mechanical Projects & Customer Service, Blue Star Limited, accepted this award on behalf of Blue Star.

Blue Star was adjudged the winner after rigorous evaluation by the Awards Jury under the Chairmanship of Honourable Justice M N Venkatachaliah, former Chief Justice of India, and former Chairman of the National Human Rights Commission of India and the National Commission for Constitution of India Reforms.

Blue Star, with a rich heritage of 79 years, lays great emphasis on Enterprise Level Risk Management and the Company has formulated a Governance, Risk and Compliance (GRC) policy to effectively deepen integration of the elements of GRC.

The Company has adopted the COSO 2017 framework for its Risk Management framework that is very well aligned with its business strategy.

Vir S. Advani, Vice Chairman & Managing Director, Blue Star Limited, adds, “Winning this coveted award for the second time is indeed a moment of pride for us. Over the years, Blue Star has been strengthening its risk management practices and has developed a framework which empowers businesses during risk-based decision making. It has always been our endeavor to achieve the best-in-class risk management standards benchmarked globally.”

*The Golden Peacock Awards, instituted by the Institute of Directors (IOD), India in 1991, are regarded as a benchmark of Corporate Excellence worldwide. The award is a prestigious win and suitably acknowledged and celebrated by peers and industry due to its 3-tier, stringent, yet transparent evaluation process based on internationally recognised criteria.

A single person can bring a smile, but a hundred people can bring happiness