In the ’90s Indian pop-culture (and walkman) ruled! Short-listing music for cassettes and making time for television shows and films that were not available on-demand were arguably some of the most important tasks on people’s to-do lists. Since the lockdown, warm feelings and fond memories of those simpler times are flooding people with nostalgia. We have seen people confess their love for this wonderful decade and elements of its popular culture with throwback Tweets.

To celebrate these conversations and add a dash of ’90s colour to them, Twitter has launched an all-new emoji that is sure to remind everyone of the ’90s pop-soul that resides within them. The emoji can be activated by using three hashtags – #BackToThe90s, #90sLove, #90sNostalgia.

That’s not all! Twitter is also planning an elaborate ’90s nostalgia party. 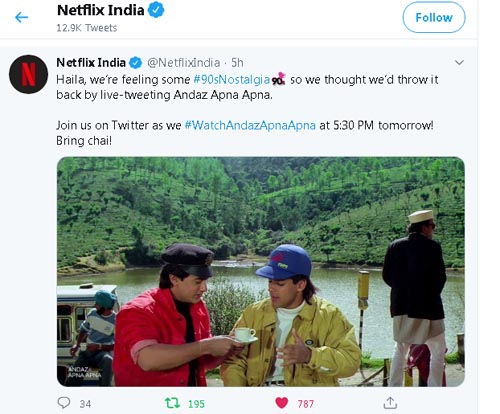 Tomorow, May 16, Netflix (@NetflixIndia) will join Twitter in this throwback and host an Andaz Apna Apna watch party for fans of the classic film. Next week, iconic Indian rapper Baba Sehgal (@OnlyBabaSehgal) will go live on Twitter to get people grooving to some of his best sing-along ’90s songs. Cricket enthusiasts will have their share of the treat too as ace cricket commentator Harsha Bhogle (@bhogleharsha) will join in the ’90s nostalgia to talk about some of the most memorable moments from the world of cricket. There’s something for everyone, just like in the ’90s.