Ranbir Kapoor's Return To Screens with " Shamshera " After his marriage 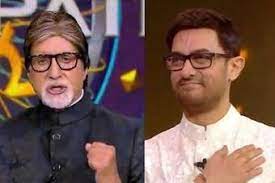 Mumbai, July 24, 2022: India’s popular game show Kaun Banega Crorepati is back on Indian Television! Amitabh Bachchan will be back on the hot seat as a host with season 14 and the first guest is Aamir Khan. The new season will premiere on August 7, 2022. The actor will appear at the premiere of the new season to promote his upcoming film Laal Singh Chaddha which is set to release on August 11, 2022.  The first promo was unveiled on Saturday celebrating Independence Day week. Apart from Aamir, the other guests on the premiere episode include Kargil War veteran Major D.P Singh, Col. Mitali Madhumita (first woman officer in the Indian Army) to win Sena Medal Gallantry, Padma Vibhushan sportsperson MC Mary Kom, and Padma Shri Sunil Chhetri (Footballer).

The popular quiz show ‘Kaun Banega Crorepati’ aired its 1000th episode on 3rd December 2021. The show began on 3rd July 2000 with Amitabh Bachchan as its host. During its ongoing 13th season, the celebrities take the hot seat on the ‘Shaandaar Shukravaar’ episodes each Friday. They play the quiz game and donate their winnings to noble causes.

When Shweta Bachchan asked her father his feelings about the show completing 1000 episodes, Amitabh Bachchan revealed that he wasn’t being offered films and thus, he decided to appear on television with this show. And, the rest is history.